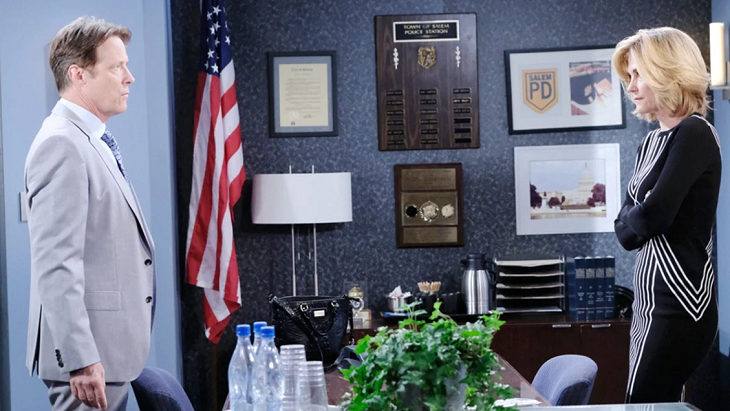 Sonny tells Will he needs to read Jennifer Horton’s (Melissa Reeves) article about Jack Deveraux (Matthew Ashford). Will reads the article and Sonny then tells Will about Xander Cook (Paul Telfer) getting immunity. Sonny believes this situation is enough to get Xander fired from Titan.

Will has some suggestions for Sonny’s new business, which leads to them making love. Sonny asks Xander if Brady hasn’t fired him yet. Xander reminds Sonny that he did hand over the diary to him. Xander tells Sonny and Will they can buy him a new car as a thank you. Will questions Xander’s way of thinking since he kidnapped Kate. Will and Sonny decide to visit Kate. “Susan Banks” (Stacy Haiduk) arrives before they can leave.

Days of Our Lives Jennifer takes Jack a copy of her article on him and tells him to eat his breakfast first. Jennifer accuses Jack of encouraging racism because he used his hate for Haley Chen (Thia Megia) to win the election. He tells Jennifer he is going to revoke her press badge. Jack says he is stopping anyone from Jennifer’s paper from coming to any of his rallies anymore. Jennifer tells Jack how pathetic he is when it comes to taking the memory serum.

Jack tells Jennifer he likes his life, and there is no way he wants her to be any part of his life. Jennifer brings Jack an old article he wrote years ago; it doesn’t move him. Jennifer tells Jack that the old Jack had a family who loved him and would never settle for what he has now. Jennifer throws away the article before walking through the park as Jack goes to Eve’s office and says he has made his decision. Jack tells Eve he wants to remember his past.

Days of Our Lives Eve Deveraux (Kassie DePaiva) shows up to speak to Ted Laurant (Gilles Marini) in the hospital. Eve wants Ted to help her put Stefan Dimera (Brandon Barash) behind bars. Eve wants Stefan to be the D.A. Ted tells Eve his answer is the same as it was before, he refused the job. Ted tells Eve this would be a conflict of interest; he cannot prosecute Stefan.

Ted wants to know why Eve wants him to be D.A. since Ben Weston (Robert Scott Wilson) has been cleared. Eve tells Ted that Ben will break the law again and she needs Ted to nail him to the wall. Ted says Ben tried to kidnap him long before this, but the answer is still no. Kate shows up and tells Ted about Gabi’s suspicions. Kate wants to recruit Nicole to help him, Ted disagrees. Kate says they have to be proactive and tells Ted to get dressed; they are going to see Nicole.

Days of Our Lives Kate Dimera (Lauren Koslow) is on the phone with Austin Reed (Austin Peck) demanding answers about his separation from his wife. Gabi Hernadez (Camila Banus) arrives and wants to know why Kate is lying about Stefan. Kate wants to know why Gabi isn’t happy since she got exactly what she wants. Kate accuses Gabi of falling in love with Stefan. Gabi wants to punish Stefan herself; she cannot marry Stefan if he is in prison. Kate tells Gabi that Stefan did this because she killed his mother.

Kate remembers Kristen’s threat before insisting that Stefan is guilty. Gabi asks how Nicole Walker (Arianne Zucker) fits into this. Gabi knows that Nicole saw Ted and Kate in the tunnels, Kate denies seeing Nicole. Gabi goes to Nicole’s room to speak to her. Gabi runs into Brady and tells him something fishy is going on, and Nicole is behind it.

Days of Our Lives Kristen Dimera (Stacy Haiduk) calls Xander demanding he returns her mask. Xander has taken Kristen a Halloween mask instead. Xander tells Kristen how nice Brady Black (Eric Martsolf) looks today. He claims to be on the phone with his assistant and tells Brady she has a crush on him.

Xander offers to put in a good word for Brady, but Brady tells Xander he no longer works for Titan. Kristen imagines going to the Kiriakis mansion and begging Brady for another chance. Kristen imagines Brady choking her and vowing to put her in prison.

Xander tells Brady the contract says he has to be convicted of a felony and he got immunity this morning. Xander says he did this to take Stefan down and claims to have orchestrated Ted and Kate’s release. Brady backs down when Xander says Kate will back his story and allows Xander to keep his job. Kristen puts on the mask and threatens to call the police on Gabi. Kristen pulls out a suitcase and says this may work.