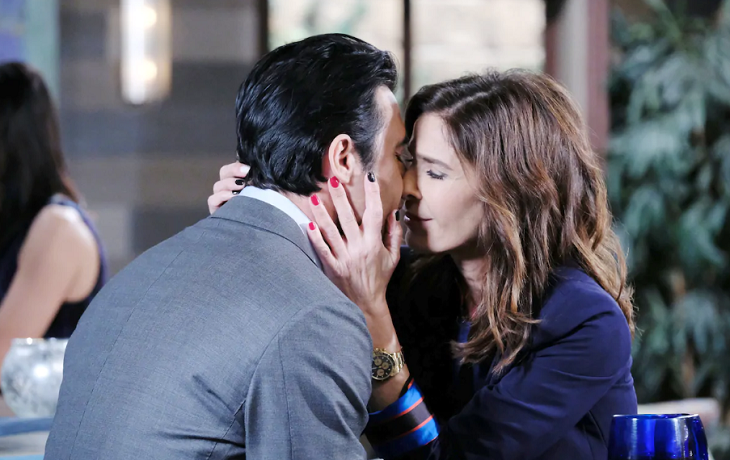 Days of Our Lives spoilers for Thursday, July 18 promise another exciting day of drama for Days of Our Lives viewers as some relationships start, others are confrontational, and one seemingly ends as one Salemite appears to give up!

One long simmering romance looks like it’s starting to heat up, as Hope Brady (Kristian Alfonso) finally lets Ted Laurent (Gilles Marini) kiss her. Hope’s heart has obviously grown fonder of Ted during the time he was missing.

She even feared he was dead as she became aware of Kate DiMera’s (Lauren Koslow) phone call to 911, having said that she had overheard Xander Cook Kiriakis (Paul Telfer) tell someone that he had killed Ted. Hope was relieved to find Ted alive, if a little worse for the wear, in the secret room outside in the gardens of the DiMera mansion.

Elsewhere, Xander and Kristen DiMera (Stacy Haiduk) play a game of cat and mouse, as neither one fully trusts the other one. Xander was arrested and even though he wiggled out of the cuffs and the charges. And he may wonder if Kristen was behind the whole thing to prove her control over him, which he resents.

Xander has made up in his own mind that Kristen is not the boss of him, and even though he considered her a partner in the past, he is quickly losing patience with her antics. Likewise, Kristen is losing patience with Xander. She no longer trusts him since he has disobeyed her orders and turned her down flat on some of them right in her face. Both Xander and Kristen will continue to double deal with one another for the foreseeable future.

Also on the next Days of Our Lives, Will Horton, (Chandler Massey) although back home and given a clean bill of health, makes an unsettling discovery. Kristen DiMera is now using a Susan Banks (Stacy Haiduk) disguise and rifled through several rooms looking for her Nicole mask. Xander locked the mask in his briefcase, which he now takes with him when he even leaves his room. But maybe Will sees things disturbed that shouldn’t be in the Kiriakis mansion and is concerned that a robber has broken in.

Jennifer Horton (Melissa Reeves) after having made an impassioned plea to her ex-husband Jack Deveraux (Matthew Ashford) about the man he used to be, finally gives up on him and decides to move on, obviously not hearing from him what she wanted to hear.

He had said he was thinking a lot about wanting to remember the past, but he said it in the middle of an argument in a sarcastic sounding way. No wonder Jennifer didn’t think Jack would ever do anything about it – namely, taking the amnesia serum! Of course, she has no idea he went and told his new wife Eve Deveraux (Kassie DePaiva) that he’d decided to take it. Eve didn’t look like she felt too good about that decision!