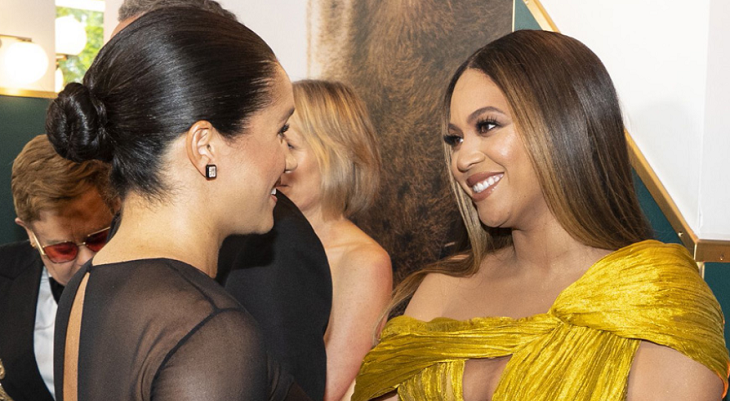 Another day, another controversial headline for Meghan Markle. This time around a lot of people can’t help but wonder if the Duchess of Sussex might have broken royal protocol while meeting Beyonce for the very first time.

Both Prince Harry and Meghan Markle were on hand for the red carpet premiere of The Lion King in London, where they got to briefly meet and chat with Beyonce and her husband, Jay-Z. Here’s what you need to know.

According to reports, it was a moment that a lot of people were anticipating: the Duchess of Sussex got to meet the Queen Bey. Not only did they get to exchange pleasantries, but Meghan also gave Beyonce a big hug right in front of the cameras, which has a lot of people wondering: did she break royal protocol?

As many royal fans already know, members of the royal family usually don’t offer hugs whenever they meet non-royal members, and especially in public.

Kate Middleton Is Behind The Royal’s Masterful PR Exercise

As a matter of fact, Prince William and Kate Middleton often keep their distance from one another and even refuse to hold hands whenever they are out and about or at one of their public appearances.

Queen Elizabeth, Prince Charles, and Camilla Parker-Bowles certainly don’t hug anyone in public but on occasion do shake hands when it’s appropriate.

But then again, many people know that Prince Harry and Meghan Markle are in a league of their own. Because they won’t’ be taking over the throne anytime soon, they have a little more room to do what they want, when they want even though they are members of the monarchy.

While a lot of people think that it was rather inappropriate for Meghan Markle to give Beyonce a hug, others think it was absolutely fine. After all, Meghan and Bey have been wanting to meet in person for a very long time and finally had the opportunity to do so.

This evening, The Duke and Duchess of Sussex attended #TheLionKing European premiere in London at the Odeon Theatre. In celebration of the film’s release, The Walt Disney Company announced #ProtectThePride, a global conservation campaign to support efforts protecting the rapidly diminishing lion population across Africa. As a part of their commitment to this cause, Disney also made a donation to The Duke of Sussex’s upcoming environment & community initiative which will be formally announced this autumn. The Duke and Duchess are committed to advancing conservation efforts across Africa and around the world, and working with communities to ensure a sustainable future for the planet. This evening Their Royal Highnesses had the pleasure of meeting the cast and creative team behind the film, as well as supporters of @africanparksnetwork, of which The Duke is President. Photo credit: PA images / Getty images – Chris Jackson

With that said, there are plenty of people who would love to give Beyonce a hug, on or off the red carpet, right? There might even be a chance that these two will soon spark a very wonderful friendship!