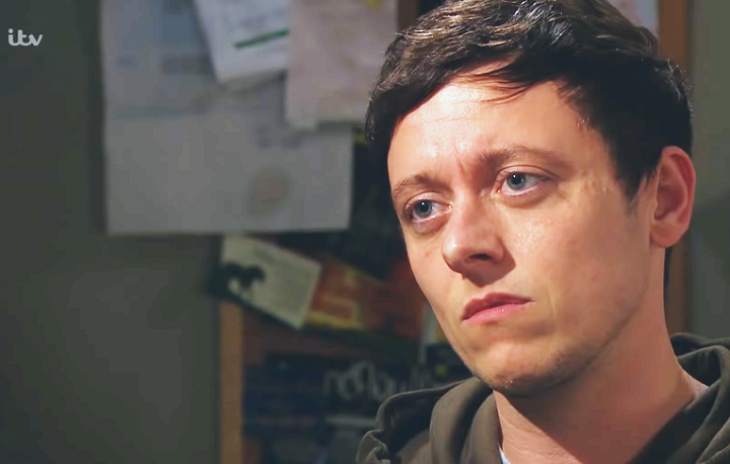 On “Emmerdale,” Matty Barton (Ash Palmisciano) will get involved in a dark storyline as the soap tackles the issue of toxic masculinity. Barton will make some troublesome new friends, Ste and Jonno, after going up against them in a cubs football match. How far will he go as he tries to gain the approval of his new friends?

In an attempt to try to fit in, Matty could make a huge mistake, getting involved with the “bad guys.” It all starts during a football match where Matty is getting aggressive treatment from the opposing team defender, Jonno.

Pete Barton (Anthony Quinlan) tries to defend his friend during the game, something that Matty doesn’t appreciate.

At the pub, while Matty is giving Pete a piece of his mind, Jonno and Steve invite him over to sit with them. He finally feels accepted, but he is about to face peer pressure as his new friends force him to do things that are beyond his comfort zone, which worries Pete significantly.

Matty has found it hard to make friends ever since he revealed that he is a transgender. He also feels betrayed when he finds out from Amy Wyatt (Natalie Ann Jamieson) that Victoria Barton (Isabel Hodgins) is planning to leave the village. He feels hurt that Victoria didn’t let him know and after their confrontation, he storms off to join Steve and Jonno. Victoria tries to make peace but Matty ignores her.

Emmerdale Spoilers – Storyline Will Explore The Issue Of Toxic Masculinity

“And he goes on a bit of a mission. It taps into the whole toxic masculinity thing. Matty feels as those he has to be more like them in order to fit in. Basically he’s going through it a little bit late in life – something that most lads go through at about 12 or 13 – trying to figure out how to act with the lads. It’s definitely a side to him that we haven’t seen before.”

When Billy Fletcher (Jay Kontzle) and Ellis Chapman (Asan N’Jie) try to intervene by telling Matty that his new friends are saying nasty things behind his back, fans have yet to find out how he will react.

NEXT WEEK’S SPOILER PICS ARE UP! Check them out: https://t.co/9IebkBp7f4 #Emmerdale pic.twitter.com/lSD3iSka3a

Palmasciano said that his alter ego doesn’t want to offend anyone in the village and it’s also his first time being with a group of male friends. His character just wants to be liked and is in desperate need of validation and that’s why he’s going down this dark path.