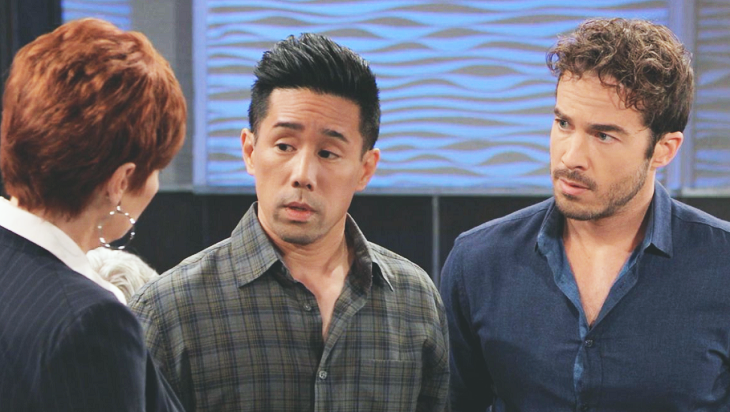 Dev questions why Josslyn is looking at the compass, she says Oscar Nero (Garren Stitt) gave it to her. Carly Corinthos (Laura Wright) walks in as Josslyn and Dev are talking, and asks if there is a problem. Josslyn tells Carly this is her fault, she blows up at Dev when he speaks to her, and he doesn’t know how to handle her. Dev excuses himself to go to work. Carly believes Dev left so she and Josslyn can talk.

Carly tells Josslyn that experiencing conflicting emotions is normal. She should not be inflicting her emotions on Dev. Carly tells Josslyn this does not make her a bad guy. Carly wants her daughter to know that she gets a vote and she wants Josslyn’s opinion about Dev staying there. Josslyn agrees to give it a trial run, Carly wants her to be honest about her feelings.

Sonny tells Ava that now Avery thinks her big brother will be sending a message and expects to hear from Kiki every day. He tells Ava to give her way but keep her psychic dealings away from Avery. Ava is upset that Julian didn’t defend her, but he agrees with Sonny. Julian thinks Ava needs grief counseling. Ava tells Julian that she knows Sibley Gamble (Veronica Cartwright) connected with Kiki because she was still furious with her. Julian tells Ava about his update on the custody situation.

General Hospital’s Cameron Webber (William Lipton) meets with Liz Baldwin (Rebecca Herbst) and Franco Baldwin (Roger Howarth) and tells them he has a car. Cameron wants to keep the car but knows they have nowhere to keep it at home. Liz is proud of how Cameron handled this. Liz and Franco expect him to help with the insurance etc.

Liz and Franco agree to let him keep the car. Liz says they have to keep the car in a garage eventually, Cameron agrees and rushes off to work. Liz and Franco talk about Cameron’s way of handing Oscar’s death. Franco seems to be getting a cold. They talk about Ava’s plus one. Liz gets a message that their photos have been uploaded, they look at them. Franco realizes someone else is in the picture of him and Liesl Obrecht (Kathleen Gati).

General Hospital’s Brad Cooper (Parry Shen) goes into Liesl room and starts to inject her with something, Nina Reeves (Cynthia Watros) walks in and asks what he is doing there. Brad claims to be there to draw blood, Liesl is annoyed. Lucas Jones (Ryan Carnes) comes in and tells Brad he needs to speak to him. Liesl wants to know if Hayden Barnes (Rebecca Budig) has been arrested.

Nina thinks it might have been an accident, Liesl insists she was pushed. She tries to explain that Hayden would not have pushed her; most people don’t react the way Liesl would have. Liesl wants to read Nina her latest column. Liesl mentions the sex cult, and Nina takes the table to read it. Nina and Liesl talk about Shiloh Archer (Coby Ryan McLaughlin). She realizes that Shiloh is Willow’s baby’s father. Nina realizes Shiloh found out about the baby from her.

General Hospital’s Willow Tait (Katelyn MacMullen) meets Alexis Davis (Nancy Lee Grahn) at the Metrocourt; they are waiting on Diane Miller (Carolyn Hennesy), Lucas, and Brad to join them. Willow tells Alexis about her confrontation with Shiloh Archer (Coby Ryan McLaughlin). Diane has petitioned the court to stop all proceedings. Shiloh cannot move forward until his charges are dealt with and resolves.

He will have to start over from the beginning with court proceedings; nothing he has done is admissible in court. Diane and Alexis tell everyone that Wiley Cooper-Jones (Theo and Erik Olson) stays with Brad and Lucas. Brad and Lucas both thank Willow for protecting Wiley. Brad calls and updates Julian. Brad wants to celebrate with Lucas and Willow. Lucas tells Brad and Willow they need to get Shiloh’s medical records. Lucas brings up the heart condition and says they need answers.

General Hospital’s Dev is in the park, and Trina Robinson (Sydney McKayla) trips over him. Cameron comes riding his bike through the park and joins them. Cameron tells Trina and Dev about Oscar leaving him the car. Trina and Cameron talk about their last road Tripp. Dev doesn’t understand why they didn’t pick the lock. Josslyn runs in and saves the day.

Dev overs to drive the teens anywhere they want to go. Josslyn suggests Cameron leave the car at her house. Trina says Cameron’s parents don’t want his car near a bunch of bulletproof limos. He defends Sonny before leaving to drop off his papers. Trina wants answers about Dev. Josslyn defends Dev. Cameron rushes off to community service. Josslyn and Trina go to get a pretzel.

General Hospital’s Sonny arrives home, and Carly tells him about her talk with Josslyn. Sonny agrees that she has a say in what happens. Sonny would let Dev get a job and live somewhere else if he were older, but he’s not. Sonny wants to help Dev. Sonny asks if Dev is at the Metrocourt, Carly isn’t sure. Carly looks at boarding schools for Dev; Sonny tells her this won’t work, he was this kid. Sonny wants this kid invested in being there and being a part of their family. Dev overhears the conversation and smiles.