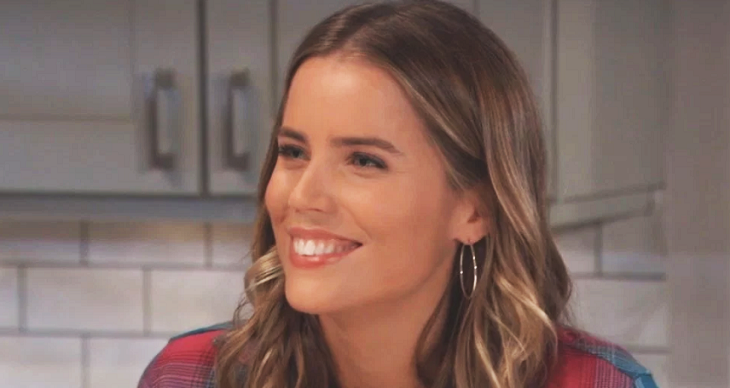 Detective Harrison Chase (Josh Swickard), looking like he’s all dressed up to play baseball, catches up with his newly freed and smiling girlfriend Willow Tait (Katelyn MacMullen) in a park. He wants to know what has her in a good mood. She will probably tell him the good news that she found out in the meeting she had yesterday with Alexis Davis (Nancy Lee Grahn), Diane Miller (Carolyn Hennesy), Lucas Jones (Ryan Carnes) and Brad Cooper (Parry Shen).

The meeting was to tell all concerned parties to Wiley Cooper-Jones’ (Eric and Theodore Olson) that Shiloh Archer (Coby Ryan McLaughlin) would have to wait until his criminal case was adjudicated to have another try at family court. Even then he would have to start all over because none of the evidence he thought he had, including the DNA test that Lucas tore up and threw in the trash would be admissible in court!

A smiling Sasha Gilmore (Sofia Mattsson) has an announcement to make! She tells someone that she’s moving out of Wyndemere! However, that does not likely mean she is going back to Chautauqua, New York, as Valentin Cassadine (James Patrick Stuart) would hope.

It means that she’s moving somewhere else, perhaps moving in with someone else or maybe she’s moving into her own apartment. General Hospital viewers will recall that in a recent GH episode she renewed her Volvonino’s Gym membership for a year. Valentin won’t be happy although Michael Corinthos (Chad Duell) and Nina Reeves (Cynthia Watros) will be thrilled.

Jordan Ashford (Briana Nicole Henry) has gone to the Port Charles Police Department with some papers in her hand. She approaches acting commissioner Mac Scorpio (John J. York) and appears to be handing him the papers as she tells him he’s still Police Commissioner. Is Jordan quitting, or is she giving him some work to do as she still recovers? The papers are in loose form, not in a file, so General Hospital viewers will have to wait and see what these papers are and why Jordan is giving them to Mac.

Meanwhile, Jordan’s husband Curtis Ashford (Donnell Turner) is with Valentin, and he wants Valentin to clarify something for him. Namely, does he want the job he’s given Curtis done faster, or does he want it done right? It sounds like Valentin is getting impatient to find the intel he needs to get Jasper Jacks (Ingo Rademacher) away from Port Charles and more importantly, away from Nina!

General Hospital viewers will recall that as Franco Baldwin (Roger Howarth) and his wife Elizabeth Baldwin (Rebecca Herbst) looked at pictures taken during their recent wedding celebration, Franco spotted someone lurking in the background of one taken of himself and Liesl Obrecht (Kathleen Gati). Liesl has been insisting someone pushed her overboard on the Haunted Star. Franco shares a theory with Liz. Perhaps the person lurking in the background of the picture, seemingly watching and eavesdropping on he and Liesl might be the person who tried to kill her.

Over at General Hospital, Nina continues her visit with her Aunt Liesl in her hospital room. Nina had just learned of Willow’s having been in jail for contempt of court in a custody suit with Shiloh, for not telling him she’d had his child.

Nina explained to Liesl who Shiloh is and what he does, and even Liesl didn’t like him. Nina started getting emotional, as she realized she may have done something very wrong by tearing down Willow at the Nurses’ Ball about giving up her child in Shiloh’s earshot!

Sam McCall (Kelly Monaco) is happy and bubbly as she has a surprise for a confused looking Jason Morgan (Steve Burton)! It sounds like she’s playing guessing games with him, wanting him to guess what her surprise is!