Days Of Our Lives Spoilers Friday, July 19: Susan Hits On Brady – Gabi’s Showdown With Xander – Déjà Vu For Will And Sonny 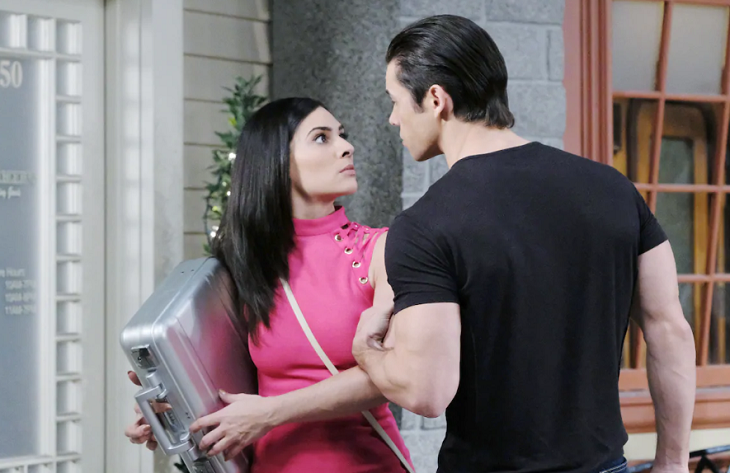 Days of Our Lives spoilers tease that Friday, July 19th promises more excitement and drama as suspenseful situations and mystery ramps up for viewers!

Brady Black (Eric Martsolf) is thrown for a loop when “Susan Banks” (Stacy Haiduk) suddenly shows up at the Kiriakis mansion for a visit, ostensibly having heard about Will Horton’s (Chandler Massey) dire straits, and wanting to check up to see if he is okay. She passes Will and his husband Sonny Kiriakis (Freddie Smith) on the way through the mansion.

It’s actually being Kristen DiMera (Stacy Haiduk) in a new disguise, since Xander Cook Kiriakis (Paul Telfer) stole her Nicole Walker (Adrienne Zucker) mask and won’t give it back to her. She finally finds Brady, still intent on seducing him, and gives it another shot as – Susan Banks! Brady obviously is shocked, and anything but turned on/ He will want to get away as quickly as he can!

Days of Our Lives Coming And Goings: Chrishell Hartley Returns As Jordan Ridgeway

The tale of two Susans begins when the real Susan Banks (Stacy Haiduk) arrives, and again passing by Will and Sonny. They won’t know if they are experiencing déjà vu or if they don’t know if Susan is going or coming, and perhaps consider the possibility that Susan herself doesn’t know if she’s going or coming either! Then again, they may think they are seeing double if the two Susans come within their vision ranges at the exact same time!

Also in Friday’s Days of Our Lives episode, Gabi Hernandez (Camila Banus) will have a showdown with Xander. She now can connect him to Ted Laurent (Gilles Marini) and Kate DiMera’s (Lauren Koslow) kidnapping, after talking with Kate earlier in the week and trying to get her to come clean about who kidnapped them.

Kate may tell Gabi about the 911 call she made when she heard Xander telling someone (Kristen) that he had killed Ted Laurent and so Gabi may connect Xander to Stefan DiMera’s (Brandon Barash) troubles stemming from Ted and Kate’s accusations that he was responsible for their kidnappings. In addition, Xander is turning state’s evidence against Stefan as part of an immunity deal he worked out with Police Commissioner Eve Deveraux (Kassie DePaiva).

Ciara Brady (Victoria Konefal) happens to be close by when her mother Hope Brady (Kristian Alfonso) finally lets Ted kiss her. Ciara, of course will be thrown by the sight and won’t know what to think. Will she interrupt their romantic moment and want to know what in the heck is going on and has her mother lost her mind? Days of Our Lives viewers think so!

It wouldn’t be like Ciara not to speak her mind over witnessing such an encounter, although she’s not likely to grab a vase of water and throw it on them like her Grandma Julie Williams (Susan Seaforth Hayes) did on Gabi and Stefan in last Friday’s episode!