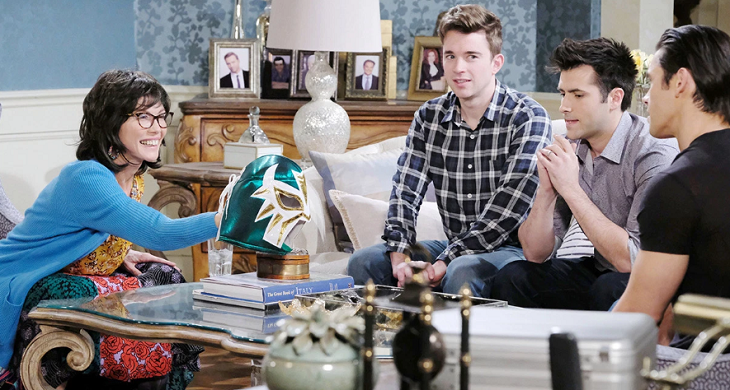 Hope and Jennifer talk about the men they thought they would grow old with, but it didn’t work out. Jennifer tells Hope that Jack doesn’t want to remember and she needed this slap in the face to prove it. Jennifer tells Hope she is a hero for saving Kate and Ted. Ted walks in and joins Hope and the two kiss. Jennifer meanwhile, calls Dr. Shah (Andrew Khabbazi) and ask him to have dinner.

Days of Our Lives Gabi Hernandez (Camila Banus) tells Brady Black (Eric Martsolf) that Nicole Walker (Arianne Zucker) is setting up Stefan Dimera (Brandon Barash). Brady thinks Gabi is grasping at straws. Gabi tells Brady that Nicole has to be involved and how she had to see Ted and Kate in the basement. Gabi tells Brady about Nicole and the goofy mask. Gabi confronts Xander Cook (Paul Telfer) in the square and accuses him of working with Nicole. Gabi grabs Xander’s briefcase and says she bets her proof is in there.

Days of Our Lives Kristen Dimera (Stacy Haiduk) shows up at the Kiriakis mansion dressed as Susan Banks (Stacy Haiduk). Will Horton (Chandler Massey) and Sonny Kiriakis (Freddie Smith) invite Susan to sit down. Xander Cook (Paul Telfer) is in the living room, and Susan asks who he is. Xander is admiring the Nicole mask and quickly puts it away as the trio walk into the room.

“Susan” starts to attack Xander for shooting Marlena Evans (Deidre Hall) but Will stops her. Susan wants to thank Xander for saving Will and has a gift for him. She pulls out the wrestling mask and Xander realizes she is Kristen. Kristen warns Xander in her subtle sort of way, and they banter back and forth. Will asks if Susan is OK as she runs out after Xander and walks right into Brady.

Susan asks Brady if he saw Xander, she wanted to ask him about the gift she gave him. Brady tells Susan not to worry about Xander, he doesn’t appreciate anything from anyone. Will goes through Susan’s purse while waiting on her to return. Susan goes upstairs, trying to find Xander’s room and ends up in Brady’s room as he is coming out of the shower.

Days of Our Lives Ted Laurent (Gilles Marini) and Kate Dimera (Lauren Koslow) are discussing joining forces with Nicole to take down Kristen. Ted suggests they try to get Xander to join them. Kate doesn’t agree and then passes out in Ted’s arms. Ted insists that Kate eat something sweet when she regains consciousness to bring up her sugar. Kate assures Ted that Hope will not be happy when the truth comes out. Hope has been known to attack not so nice guys.

Days of Our Lives Eve Deveraux (Kassie DePaiva) is furious that Jack Deveraux (Matthew Ashford) wants to take the memory serum and tells him he is lying about doing it for his kids. Eve accuses Jack of wanting to remember his past for Jennifer. Jack tells Eve he can’t stand Jennifer and doesn’t want to be with her. He says he is married to Eve; she thinks he is using her.

Jack tells Eve his love for Jennifer is history; she says only until he takes that serum. He tells Eve that she is his present and future. Jack wants to know how he can make Eve understand he is in love with her. Eve wants Jack to agree not to take the serum and to protect what they have. Jack apologizes, he wants his memory back. Eve walks out on Jack.