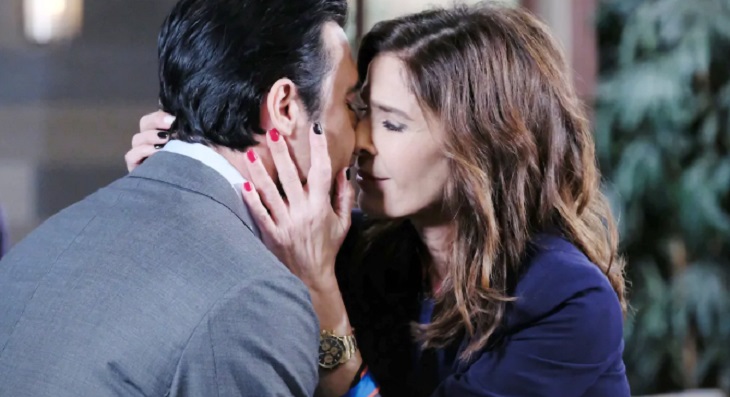 Days of Our Lives Spoilers – A Slow Burn Romance

Ted has been attempting to romance Hope since even before her marriage to Rafe Hernandez (Galen Gering) started to disintegrate, and she finally divorced him. Ted has been taking it slow, just being a good friend and shoulder to lean on, but the two have been getting closer and closer, as Hope has needed someone to talk to and to lean on, and it would seem that she has become more and more bonded to Ted as time has gone on, and of course Ted has become more and more bonded to Hope as well.

It is said that absence makes the heart grow fonder, and Hope’s worries and fears for Ted during the time he was missing and held captive in the secret room at the DiMera mansion didn’t help any, and really seemed to ramp up Hope’s feelings for Ted.

Even though Hope didn’t fall apart, Days of Our Lives viewers could see the worry and fear in her eyes, as well as sadness when she listened to Kate DiMera’s (Lauren Koslow) 911 call in a recent episode, after she had overheard Xander Kiriakis (Paul Telfer) telling someone, which was Kristen DiMera (Stacy Haiduk) that she had killed Ted. Ted, along with Kate, was trapped in that secret room, Ted with a head wound from a fire poker that Kristen knocked him out with, for several days and Ted was there at least a couple of days longer than Kate was!

Days of Our Lives Spoilers – Hope Brady On The Rebound

It is also said that rebound relationships rarely work out because subconsciously the person on the rebound is trying to replace the person they lost with the new person. Is Hope really falling in love with Ted, or is he just filling the hole in her heart from what she perceived as Rafe’s continual rejection of her by running off to be the hero for one ex-wife or girlfriend after the other?

Hope’s complaint is that Rafe had time to provide emotional and other support for all his ex-wives and ex-girlfriends, but never for her, at the time she needed his love and support the most, when her daughter Ciara Brady (Victoria Konefal) was kidnapped twice and nearly set on fire. That was a deep insult and wound to Hope’s heart!

Days of Our Lives #DOOL Spoilers: Jen Decides To Move On From Jack -Arranges Date With Old Flame @celebratesoaps https://t.co/W7OGnqrChS

Will Hope and Ted’s kiss, which promo stills show with her initiating, be the start of true love between the two, or just a short term fling, if that?