Days Of Our Lives: Will And Sonny’s Déjà Vu When Susan Banks Arrives 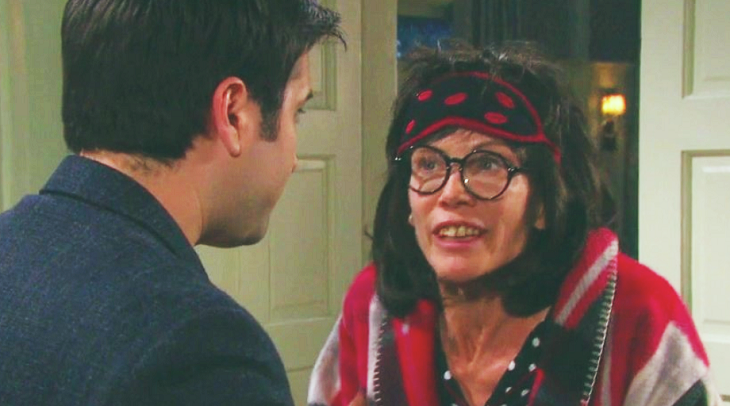 Days of Our Lives spoilers tease that Will Horton (Chandler Massey) and Sonny Kiriakis (Freddie Smith) will experience Déjà vu when the real Susan Banks (Stacy Haiduk) arrives this week on Days of Our Lives!

Days of Our Lives viewers will recall that Xander Kiriakis (Paul Telfer) swiped Kristen DiMera’s (Stacy Haiduk) Nicole Walker (Adrienne Zucker) mask and sent her a Mexican wrestling mask in its place as part of his revenge for his getting arrested, among other things. He thought he had her penned in like a pig in a poke until she looked through her luggage and realized she had her Susan Banks costume along.

Kristen dresses as Susan and goes to the DiMera mansion to look for her mask, which Xander actually has in his ;locked briefcase which he always takes with him. He learned his lesson when Ted Laurent (Gilles Marini) found Holly Jonas’ (Scarlett and Harlow Mallory) true autopsy report in it. This created a mess for Xander with Kristen.

Will and Sonny first see Kristen, disguised as Susan, come into the DiMera mansion with the intention of looking for her Nicole mask. They are surprised to see “Susan” and are a bit confused at her showing up in Salem, especially so unexpectedly. She covers by telling them she had heard from someone in Salem that Will nearly died, and wanted to make sure that he was all right.

Kristen gets past Will and Sonny after catching up with them a bit as Susan, and then proceeds to search through the DiMera mansion for her mask, since she knows Xander lives there. She doesn’t succeed, she instead runs into Xander. And of course he knows who she really is.

Kristen picked a poor time to impersonate Susan Banks! While Kristen, as “Susan” is still there, the real Susan Banks shows up. For those newer Days of Our Lives viewers who aren’t familiar with Susan Banks, she is the mother of E.J. DiMera (James Scott). She was hired as a doppelganger, or look-alike, for Kristen DiMera, formerly Kristen Blake, by the late (we think) Stefano DiMera (Joseph Mascolo).

This was in the mid-1990s. More recently, the real Susan Banks had become a mother figure to Will, who thought during his amnesiac stage he may have been her son EJ. After proven otherwise, Susan had a breakdown and was hospitalized in a mental institution. That’s the short version of the story.

The real Susan has obviously been released from the mental institution and comes to the mansion. She may have heard about Will’s near death for real, instead of it being a cover story like Kristen made up. Will and Sonny must think they are both seeing double or that Susan is lost, when they just saw “Susan” and she went elsewhere in the mansion and here she comes again.

The “tale of two Susans” will only get more confusing over the next few episodes of Days of Our Lives!