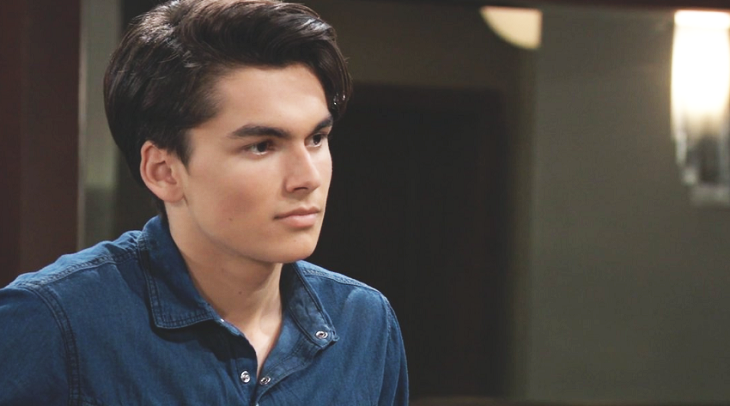 General Hospital spoilers tease that Dev Cerci (Ashton Arbab), who some fans feel bears a striking resemblance to both Sonny Corinthos (Maurice Benard) and Brenda Barrett (Vanessa Marcil) could be their long-lost son.

Brenda and Sonny were involved on and off between the years of 1996 to 2007, when both were also involved with other people off and on. Sonny had married Lily Rivera (Lilly Melgar) in the mid-nineties and there was some jealousy on the part of Brenda, who he also had been involved with.

Brenda also became involved with Jasper Jacks (Ingo Rademacher) during this time period. Meanwhile, at some point after Lily was killed, Sonny started to become involved with Carly Benson (Laura Wright) during the same time periods. Brenda was the start of the romantic rivalry between Jax and Sonny. And as General Hospital viewers know, that extended to Carly and Jax eventually getting married, with Josslyn Jacks (Eden McCoy) as a result.

Sometime during that period, prior to 2007, Brenda was also involved with a man named Aleksander Janacek Jr (Robert Knoppers). Aleksander appeared in flashbacks of Brenda’s history. He was the son of the late mob boss Theo Hoffman (Daniel Benzali), otherwise known as “The Balkan” and Theo’s wife, Suzanne Stanwyck (Adrienne Barbeau).

Suzanne Stanwyck was a friend of Brenda’s for a long time, and ran her charity, Alliance To Save Exploited Children (ASEC). In 2011 she was revealed as actually being Theo Hoffman’s wife and Aleksander’s mother. She and Theo came looking for revenge, blaming Brenda for their son Aleksander’s death.

Brenda had found out she was pregnant when she was in New York City and had been involved with Aleksander, but had broken up with him prior to 2009. It was revealed she and Dante Falconeri (Dominic Zamprogna) also had a past in New York, when he became her bodyguard.

When Brenda was about seven months pregnant with the baby she later named Alec Scott, she and Suzanne had traveled together on ASEC business to Africa, where Suzanne drugged her and induced labor so that she could take the baby she assumed to be her grandson. She took a baby named Lucian  from ASEC and swapped him with Brenda’s real baby.

For several years Brenda raised Lucian as her son until she was convinced to have a DNA test taken on him by Sonny, who she was married to at the time. When Suzanne heard about it she kidnapped Lucian and took him to San Antonio, not wanting the truth about the baby swap to come out. Brenda was distraught that Lucian had disappeared and Sonny, Dante and even Carly, not with Sonny at the time got involved trying to find him. Sonny, Dante and Carly found the real Alec and Sonny took him from Suzanne, returning him to Brenda.

General Hospital Spoilers – Could This Mystery Be Tied To Jasper Jax?

One or two huge questions remain, no DNA test was ever performed on either Lucian or Alec, so there was no proof of paternity. Brenda took Alec, accompanied by Jax, to Rome, Italy fearing for Alec’s life because of Anthony Zacchara (Bruce Weitz), when Alec was still a small boy. And Alec, Lucian and Josslyn Jacks (Eden McCoy) were all about the same age.

Brenda hasn’t been heard from or back in Port Charles since 2013, engaged to Jax at the time, but no mention was ever made of her son! Could Dev Cerci be Sonny’s and Brenda’s child, or could he possibly be Lucian, who was never mentioned again?

This could be yet another mystery tied to Jax and his recent return! If he is a SORASED Alec, he may remember Dante and Sonny both from his young childhood. If he is Lucian, he may also remember Sonny and Dante because Brenda and Sonny were married at that time, while Carly was married to Jax!