General Hospital Rumor: Will Nelle Kidnap Jonah And Go On The Run With Ryan? 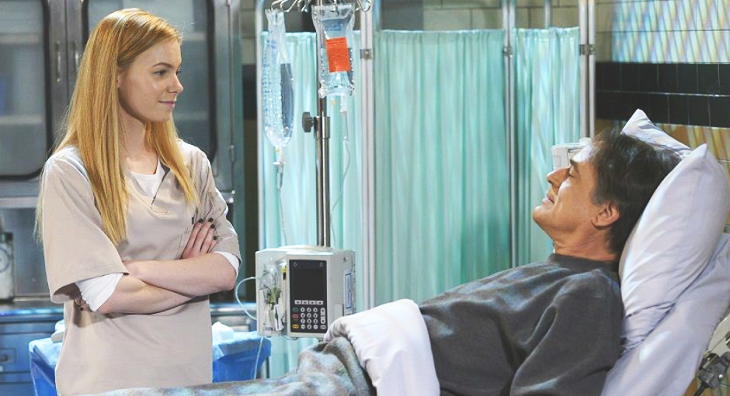 General Hospital spoilers tease that Nelle Benson’s (Chloe Lanier) “parole” may not go as she assumes it will and she may land in Ferncliff, not Pentonville! But if she does land in Ferncliff, will Ryan Chamberlain (Jon Lindstrom) be with her and what kind of trouble will they get into and cause Port Charles residents?

General Hospital viewers will recall that the last time we saw Nelle, she was in Pentonville Prison. Ryan Chamberlain had just been transferred into the Pentonville Prison infirmary from General Hospital, where he had been tricked into donating one of his kidneys in order to save Police Commissioner Jordan Ashford’s life. He and Nelle formed a bond over their perceived mistreatment by others and both having had “an organ stolen from them” as Ryan put it.

Although Ryan claimed to Nelle that he could never hurt Ava Jerome (Maura West) that could quickly change. His love for Felicia Jones, now Felicia Scorpio (Kristina Wagner) turned from love to hate and eventually he sought to kill her, because of her rejection of him. His focus and his obsession turned from Felicia to Ava when he met her. But his score to settle will more than likely be with his twin, Dr. Kevin Collins (Jon Lindstrom) rather than with Ava. He blames Kevin for his losing his kidney.

Nelle, on the other hand, may still feel she has a score to settle with not only Carly Corinthos (Laura Wright), but her son Michael Corinthos (Chad Duell). She will cruelly harass Michael from Ferncliff over the presumed death of their son Jonah Corinthos (Theodore and Eric Olson). This will likely around the time of what would be his first birthday.

Of course, General Hospital viewers and Brad Cooper (Parry Shen) know the truth about Jonah. He really isn’t dead, but lives in the form of Wiley Cooper-Jones. Liesl Obrecht (Kathleen Gati) also knows the truth and nearly blundered out the whole thing while drunk on the Haunted Star.

But no one seemed to understand her cryptic ramblings. She however has given hints to her niece Nina Reeves (Cynthia Watros) when Nina came to her in tears telling her that Wiley’s birth father was Shiloh Archer (Coby Ryan McLaughlin).

General Hospital Spoilers – Will This Evil Dynamic Duo Escape Together?

Kevin, District Attorney Robert Scorpio (Tristan Rogers) and Acting Police Commissioner Mac Scorpio (John J. York) know that neither Nelle nor Ryan, should be transferred to such a loose facility as Ferncliff. If they need mental health care it should be in an escape-proof facility. Ryan in particular is an escape artist, and with Nelle as his right hand – pun intended – Ferncliff would be a breeze to escape from! Both have been there before and are familiar with the “lay of the land”.

Harmony, who has flipped on Shiloh and made amends with her daughter Willow Tait (Katelyn MacMullen) and has returned to her real name of Lorraine Miller (Inga Cadranel), will likely stay in Pentonville. But that doesn’t mean she didn’t let valuable information about her grandson, who Nelle knows is really her baby, slip while Nelle was still there.

Much like Ryan, Nelle is also a master manipulator and knows of the threat of Shiloh kidnapping Jonah. Her plan may be to kidnap Jonah and go on the run with Ryan. He would be an immense help to her with his expertise in staying hidden. This would dig the knife even deeper into Michael’s heart, but at least the baby won’t be with Shiloh.