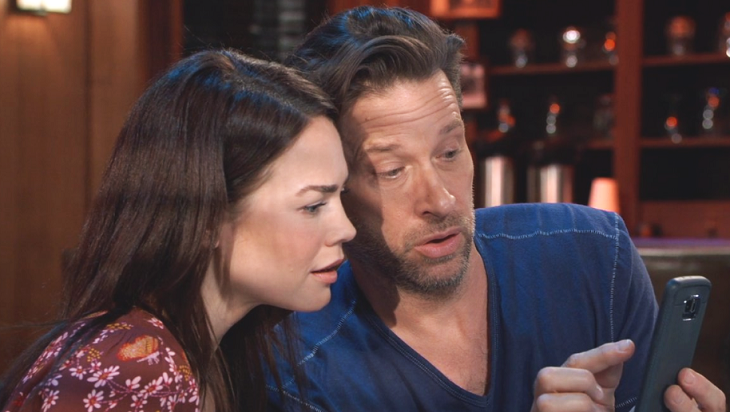 Liesl tries to tell Nina this isn’t her fault. Liesl tells Nina it cannot be that bad. Nina thinks Shiloh heard about the baby from her. Liesl suggests that Shiloh is not the baby’s father. Valentin interrupts Nina and Liesl and tells Nina they have an appointment.

General Hospital’s Willow meets with Harrison Chase (Josh Swickard) and gives him the good news about Wiley Cooper-Jones (Theo and Erik Olson). Willow explains that Shiloh has no legal way to prove Willow had a child or to go after custody. Shiloh would have to start from scratch. Willow has to find another job because the principal won’t take her back.

Willow has a job interview this afternoon as a governess. She can’t say for Chase’s game but thinks he is cute. Willow is interviewing for a prominent family with a daughter who lives with her stepmother and her father. Willow’s interview is with Nina and Valentin Cassadine (James Patrick Stuart). She sees Valentin and Nina and tells them she knows they aren’t comfortable with her and the feeling is mutual and rushes off as Nina tries to apologize.

General Hospital’s Sam McCall (Kelly Monaco) is at the hospital and meets with Jason Morgan (Steve Burton). Sam is hiding something from Jason, and he tries to figure out what it is when Michael Corinthos (Chad Duell) joins them. Michael tells Sam and Jason the good news about Wiley. Michael tells Sam none of this would be possible without her help. Sam tells Michael that he and Jason are partially responsible. Michael gets called away for a softball game. Sam and Jason go home, Sam is in bed and tells Jason there is a surprise in the bed.

Jason tells Sam that it is a distraction. He jumps onto the bed and begins to tickle Sam. Sam shows Jason a brochure on laser tattoo removal. Jason asks if Sam is OK with a scar from the tattoo. Sam is fine with it, Jason looks at it more than her. Sam is always perfect for Jason. She thinks it would have been better if Jason had taken care of Shiloh. Sam was afraid she might have pushed Jason too far by getting in so deep. Jason tells Sam he will never let anything come between them. Sam says she will always love Jason.

General Hospital’s Valentin questions Curtis Ashford (Donnell Turner) about Jasper Jacks (Ingo Rademacher). Curtis reminds Valentin that he has to do both jobs to keep his cover and will be in touch soon. Sasha Gilmore (Sofia Mattsson) watches the exchange.

General Hospital’s Jordan Ashford (Briana Nicole Henry) tells Mac Scorpio (John J. York) she can only work part-time so he’s still commissioner. Jordan and Mac go over the picture from the Haunted Starr together. Curtis comes to the station to check on Jordan. Jordan is home dancing when Curtis walks in and sees her. He tells Jordan her secret is safe with him. Curtis has everything he wants right there. Jordan informs Curtis their sex life can get back to normal soon.

General Hospital Spoilers – Michael Corinthos May Have Broken His Rib

General Hospital’s Michael and Chase meet for their game. Chase throws a fastball and hurts Michael’s ribs. Michael threatens to sue Chase who believes he is joking. Sasha wants Michael to have his ribs looked at by a doctor. Sasha asks if she can do anything for him, Michael can think of one thing. Sasha and Michael get a hotel room, and after looking at his ribs, she promises to make him feel better.