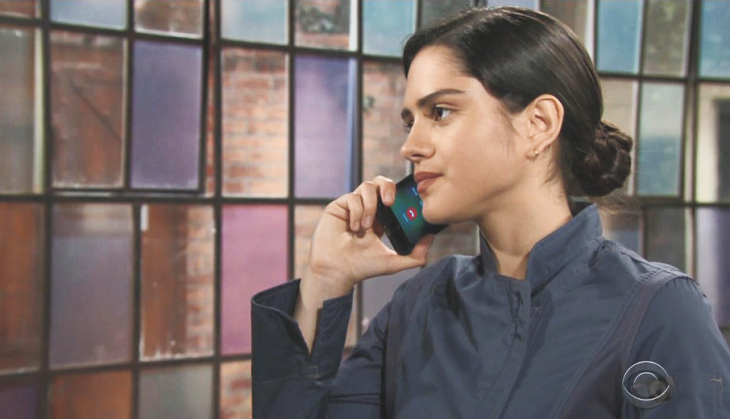 “The Young and the Restless” (YR) recap for Thursday, July 18, 2019 reveals that Theo (Tyler Johnson) arrives at Society and apologizes to Lola Rosales (Sasha Calle) and Kyle Abbott (Michael Mealor) for barging in the other night. Lola walks off and Kyle accuses Theo of trying to cause trouble in his relationship. Theo denies it. Kyle explains his priorities have changed and suggest Theo should try it. Theo feels judged but assures Kyle his ‘secrets’ from New York are safe with him.

Summer Newman (Hunter King) appears and Theo leaves with her. Lola rejoins Kyle and asks about New York. He was a man-child with a bank account and there may have been temper tantrums; nothing to lose sleep over. Rey Rosales (Jordi Vilasuso) arrives as Kyle exits. Lola muses about Kyle’s past. Rey urges her to get answers.

In Paris, Ashley Abbott (Eileen Davidson) happily greets Jack Abbott (Peter Bergman). After a tour of her company, Jack tells her it’s amazing. Ashley points out the tour was Billy Abbott’s (Jason Thompson) idea – what really brings Jack to Paris? Jack admits he’s been stuck in a funk. She thinks he’s so used to crises he doesn’t know what normal is anymore. Ashley experienced the same thing but watching Dina Mergeron (Marla Adams) slowly slip away and losing Neil Winters (Kristoff St. John), she’s realized it’s all such a gift. Ashley tells Jack she loves him as they are.

At the penthouse, Y&R’s Nate Hastings (Sean Dominic) visits Devon Hamilton (Bryton James), who is thinking of taking the next step with Elena Dawson (Brytni Sarpy). Nate wonders if he’ll propose. Devon clarifies that he wants to suggest they live together…not as roommates. Nate questions if he’s trying to prove he’s over Hilary Curtis (Mishael Morgan). Devon denies it. Nate thinks she’d be crazy to say no. Later, Elena arrives, and Devon says, “I think that we should live together.” She realizes he means as a couple. After she showers, they’ll talk about it.

At Crimson Lights, Abby Newman (Melissa Ordway) has a proposition for Phyllis Summers (Michelle Stafford) – she wants to expand the Society brand into her new hotel. Phyllis reminds her Billy, Jack and Nick Newman (Joshua Morrow) would hate it, and they’re not friends. Abby wants to set aside personal issues to strike a deal. Phyllis will consider it. After, Nate joins Abby and invites her to come with him house-hunting.

In the park, Y&R’s Summer is kissing a shirtless Theo when Phyllis Summers interrupts. Theo takes off. Phyllis warns Theo’s a player and urges Summer to stay focused. Summer argues they were working; she’s an influencer. Phyllis snarks about her taking selfies and offers work at Dark Horse.

Theo reappears and intrigues Phyllis by offering to bring celebrities to her opening. Summer snaps – her mother can’t even focus on her for five minutes. Later, Devon Hamilton and Elena Dawson arrive in the park and she remarks on the big change he’s proposing. Devon wants them to be closer and has no doubts.

In the Ashby house, Abby thinks Lily Ashby (Christel Khalil) would like Nate making memories there. Nate wonders how Cane Ashby (Daniel Goddard) would feel if he bought it. Abby says there’s only one way to find out.

In Y&R’s Traci Abbott’s (Beth Maitland) hotel room in New York City, she tells Cane Ashby she’s sorry they have to go home. He asks, “Do we?” Cane loves being in the city with her – maybe they can make this their new reality. He wants to explore what’s happening and see if they can make it real.

He gets a text from Nate Hastings about the house and says the stars are aligning. In the Ashby house, Nate tells Abby Newman that Cane said, “Yes,” and they kiss. In New York, Cane tells Traci he feels he can breathe again and be in the moment…with her. He can’t predict the future but would like to find out. He takes her hand and Traci says, “Okay.”

She explains her feelings took her by surprise. Cane says she’s talking like it’s over. Traci credits him with reminding her she is a person who deserves attention – she’s honored and grateful to be his friend, and when they get home, that’s what they’ll be – really good friends who shared something magical. They embrace.

At Society, Abby invites Nate  to join her at the Newman family dinner. He agrees. Lola overhears and teases Abby about her smile before asking about Kyle’s time in New York. Abby clucks that Theo misses his party buddy and is sure Kyle’s embarrassed about how immature he was then.

At Dark Horse, Rey questions Phyllis about Chance, who fell off the grid shortly after she was in Vegas. Phyllis denies seeing him but admits she looked for him to ask about Ronan Malloy. Rey leaves and she exhales.

At the penthouse, Y&R’s Devon Hamilton kisses Elena Dawson and says, “Welcome home.” In their bedroom, they make love.

At Crimson Lights, Theo tells Summer now that Kyle’s slowed down they’ll carry the torch for fun. After, Theo gets a call from Lola wanting to talk. And that’s a wrap.