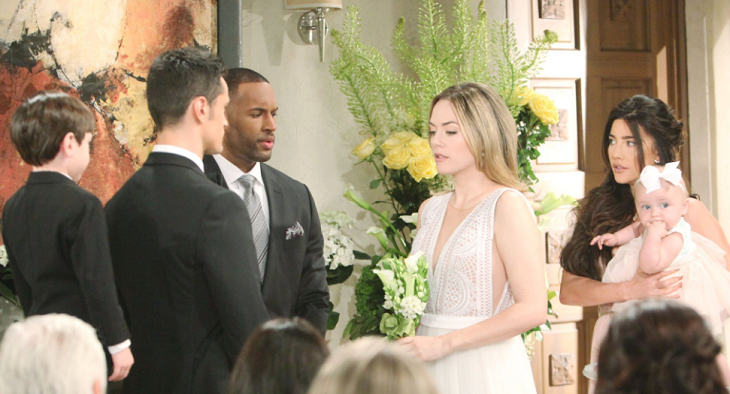 The Bold and the Beautiful spoilers for Monday, July 22, tease that Hope Logan (Annika Noelle) will have a big decision on her hands. As B&B viewers know, her wedding ceremony to Thomas Forrester (Matthew Atkinson) was just interrupted by Phoebe Forrester (River Davidson and Madeline Valdez) who crawled up to Hope and said “mama” for the first time.

Of course, this interruption happened right at the time Hope was supposed to say “I do” in response to officiant Carter Walton (Lawrence Saint-Victor), so viewers were treated to a tense cliffhanger leading into Monday’s B&B episode. Will Hope go through with her vows and become Mrs. Thomas Forrester?

Well, ongoing B&B spoilers indicate that the wedding will continue, and that Hope will agree to all of Carter’s questions, becoming Thomas’ wife. But there will be a bit of a delay while Hope considers in the moment exactly what she wants to do next.

For Phoebe, who is really her daughter Beth Spencer, to crawl up to her and say the word “mama” will be a major shocker for Hope. As B&B viewers know, Hope is devastated that Beth died and that she’ll never get to hear her own daughter call her “mama.” She’ll likely have a million thoughts going through her mind in that moment, including the family that she never got to have with Liam Spencer (Scott Clifton).

Bold and the Beautiful Spoilers: Marriage Jitters Have Everyone On Edge – Hope Pushes Herself To Say I Do

Of course, B&B viewers know that at some point the Beth secret is going to come out and Hope will find out that Beth is indeed alive, and at that point she’ll probably want Liam back so she can have her family as she’s always dreamed of having. But it seems that by the time Beth is revealed to be Hope and Liam’s daughter, Hope will already be married to Thomas.

Next, on Monday’s new episode of B&B, Florence “Flo” Fulton will cause some drama. As B&B viewers know, Flo missed out on the wedding and spent some time arguing with Zoe Buckingham (Kiara Barnes) at Forrester Creations.

Flo was all ready to go to the wedding, but decided to hit the vodka instead. She was feeling terribly about the secrets she’s keeping from her cousin Hope and decided to cope by drowning her sorrows.

It seems that after her argument with Zoe, she’ll head to the wedding reception, where she has a tense interaction with Thomas. Flo will have some harsh words for the groom, whom she’ll blast for manipulating Hope into a wedding when he knows good and well that her daughter Beth is alive.

Flo might also blast Thomas for his role in permanently silencing Emma Barber (Nia Sioux), who was on her way to tell Hope the truth about Beth when she had her fatal car accident on Mulholland Drive.

Bold And The Beautiful Spoilers – Overheated Argument Is Not Unnoticed

The Bold and the Beautiful spoilers indicate that Thomas and Flo’s argument will not go unnoticed. Liam will become seriously alarmed when he overhears a portion of their conversation. He won’t hear the whole thing, so he won’t stumble on the fact that Beth is alive, but he will hear something about a “secret” that involves Hope, and Thomas’ tone and words will be suggestive of a threat.

It seems that Liam will have a choice to make in the moment. He can either bust in on the argument and demand to know what’s going on, or he can wait and do some sleuthing on his own to get to the bottom of the big secret that Thomas and Flo have. It seems that he’ll choose the latter option, and he’ll decide to investigate the matter quietly.

Ongoing B&B spoilers say that Liam will then get Wyatt Spencer (Darin Brooks) involved in the matter and delicately ask him some questions about Flo’s background. He’ll also soon question Steffy Forrester (Jacqueline MacInnes Wood) about Phoebe’s adoption process, so it looks like he’ll be on the right track!