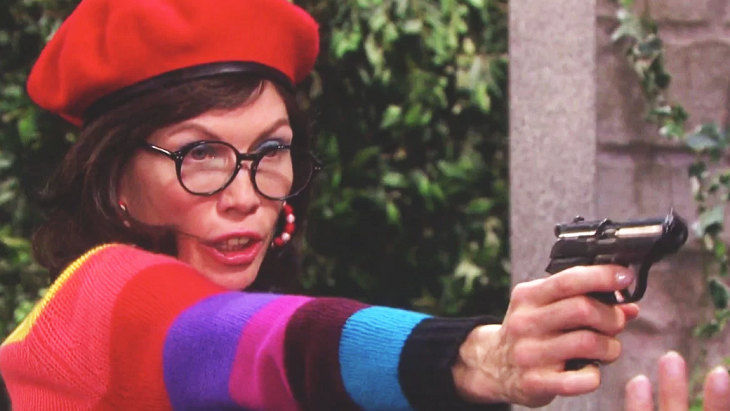 Days Of Our Lives spoilers tease that Monday, July 22 will be another day of exciting drama, tense situations and some humorous scenes with the tale of the two Susans in high gear! Days of Our Lives viewers, get ready!

Possibly Kate has figured out that Kristen is masquerading as Susan Banks (Stacy Haiduk), since Sarah is brunette and so is Susan, and she hits her on the back of the head with something. Days of Our Lives viewers must be wondering to themselves, “Really, Kate. Do you not notice that Sarah doesn’t dress as tackily as fake Susan, or do you need a thick pair of glasses yourself?”

Meanwhile, the real Susan, who arrived shortly after fake Susan, is shocked when she sees a familiar face – her own! The real Susan encounters the fake Susan in Horton Town Square, where she will confront her and want to know who she is – then quickly figures it out as she says to her, “I know who you are! You’re that mean, mean, Kristen DiMera!”

Days Of Our Lives: Will And Sonny’s Déjà Vu When Susan Banks Arrives

Then she pulls a gun from her bag and points it at her! Kristen, as fake Susan will cover quickly, telling Susan she is her sister, Sister Mary Moira who left the convent life for the real world, having met a guy. Susan apparently doesn’t keep in touch with her sister and believes her. They promise each other they won’t tell anyone they saw each other and Susan goes home and Kristen returns to her hotel.

Gabi Hernandez (Camila Banus) gives Stefan DiMera (Brandon Barash) disappointing news. She was not able to get Kate to come clean about her accusations of Stefan being responsible for hers and Ted Laurent’s (Gilles Marini) kidnapping, and Xander Kiriakis (Paul Telfer) is “turning state’s evidence” against Stefan in an immunity deal.

Ted turned down the job of DA so he would not be able to help either. Gabi even confronted Xander and stole his briefcase in Thursday’s episode, hoping to find something to clear Stefan within it. She gave it to Brady Black (Eric Martsolf) to return to Xander.

Days Of Our Lives Rumor: Haley Has Disturbing Visions Of Claire – Is She Suffering From PTSD? https://t.co/kSZaKtemtt pic.twitter.com/jpJzwn1Kbc

Xander is furious at Kristen, and fed up with her expecting him to do her dirty work, and yet throw him under the bus, all while acting like she’s the boss of him while this was supposed to be a partnership! He will make Kristen grovel before he will even consider giving her the Nicole mask back, but Days of Our Lives spoilers say he finally will!