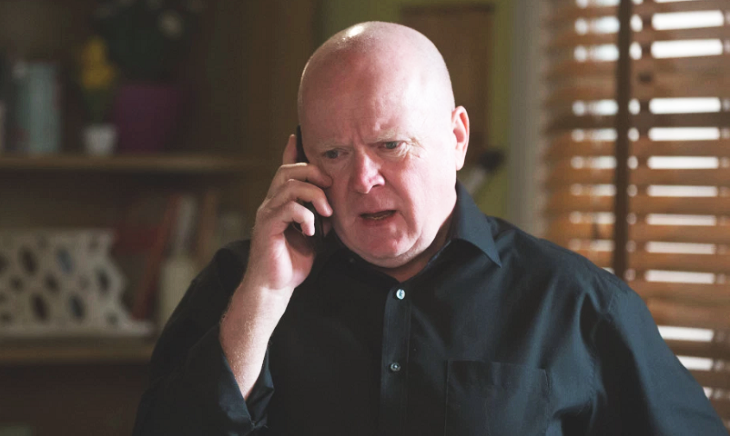 It’s been revealed recently that “EastEnders” hardman Phil Mitchell (Steve McFadden) will be left for dead in upcoming scenes as a row with a fellow resident in Albert Square spirals out of control.

Now, the show has revealed when the violent assault will take place. Phil’s dramatic new storyline will start on July 29 and the fallout will air on Thursday and Friday.

According to the soap’s newly released short spoilers, the week starts with Ruby Allen (Louisa Lytton) and Stacey Fowler (Lacey Turner) having difficulties trying to remain civil with each other. Meanwhile, Sharon  Mitchell (Letitia Dean) gets her much-awaited news and Ben continues with his schemes.

EastEnders Spoilers – Those Involved In Assault Try To Cover Their Tracks

Tuesday’s episode will see Keanu Taylor (Danny Walters) annoy Phil while Kat Moon (Jessie Wallace) gets on Phil’s bad side. The August 1 episode will show Phil left for dead and those who are involved in the assault will try to cover their tracks. By Friday, Phil will be fighting for his life.

Phil’s upcoming dramatic storyline will start as he continues the search for those who were responsible for stealing his money-laundering cash. He’ll get involved in a physical altercation that could lead to the end of an Albert Square legend. Ben Mitchell (Max Bowden), Sharon and Keanu will be among the primary suspects.

Viewers may recall that Sharon has been trying to keep her affair with Keanu under wraps as she tries to figure out who the father of her baby is. She plans to take a paternity test to finally solve the mystery of her unborn child’s father.

The Sun revealed that a BBC source told them: “Things have been bubbling for a while with those keeping secrets from Phil.”

“You get me my money, or the Slaters get done.”#EastEnders pic.twitter.com/C32K8ReLaa

“With him oblivious to it all and looking forward to becoming a father and grandfather again, life couldn’t be looking more perfect,” the insider added. “But secrets never stay secret for long in Albert Square. As everything comes to a head, certain truths will be revealed, but others remain hidden — for now.”

Phil Mitchell has been on screen for 29 years now. Could this storyline be the end of the Mitchell icon?