Emmerdale Spoilers: Aaron’s Ultimatum To Robert – Revenge Or Their Marriage 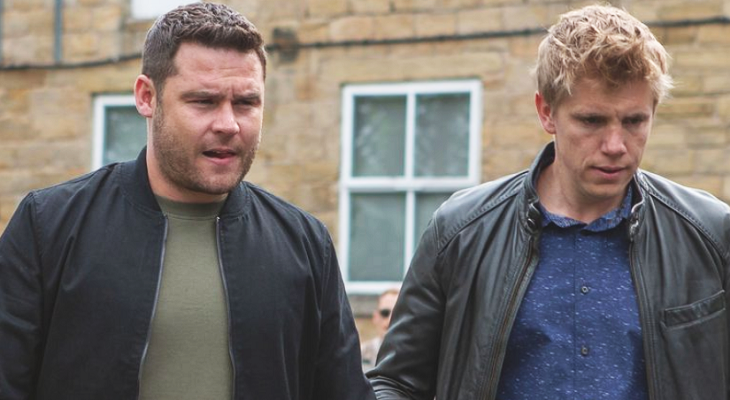 On “Emmerdale,” Robert Sugden (Ryan Hawley) has been pulling out all the stops to get revenge on Lee Posner (Kris Mochrie) for what he did to his sister, Victoria Sugden (Isabel Hodgins).

His husband, Aaron Dingle (Danny Miller), has had enough and gives Robert an ultimatum to drop his revenge plan, or their marriage is done.

Robert agrees to leave Lee alone at first. However, Aaron spots him taking out a restraining order against Lee. This pushes Aaron over the edge and he tells Robert to leave until he decides to put his family first. Viewers have to tune in to find out if Aaron and Robert’s marriage will survive this ordeal.

“Emmerdale” viewers may recall that Robert began his revenge plan against Lee on the soap’s July 10 episode.

After failing to convince Victoria to stay in the village, he decided to take matters into his own hands. He started to stalk Lee at his house, after discovering where he lived from his social media. But Robert didn’t stop at stalking.

He also used Dawn Taylor (Olivia Bromley) to get Lee’s attention and expose him for who he really is. He offered Dawn £500 at first. But when Dawn found out that she had to lure Lee into the place where she parked her car so Lee’s actions would be captured on CCTV, Robert had to increase his offer to £1000, so she would agree.

Emmerdale Spoilers – Lee Posner Onto Dawn Taylor When She Screamed

The plan was already set in place when Aaron found out about it, per “Emmerdale” spoilers. He begged Robert to stop and when he finally agreed, they were too late as Dawn already left to find Lee at the pub.

Dawn managed to lure him but instead of walking on the main road to her car, Lee convinced her to walk the path beside the canal. He pushed her against the wall and Dawn screamed his name as she told him to stop.

Lee was taken aback as he never told her his name. As Lee angrily asked Dawn who she really is, Robert and Aaron finally appeared to save her. Lee warned Robert and Aaron that he’s tired of getting harassed and it is his turn to make Victoria’s life a misery.

Did Robert just make things even worse for his sister? Will Aaron and Robert fix their marriage?