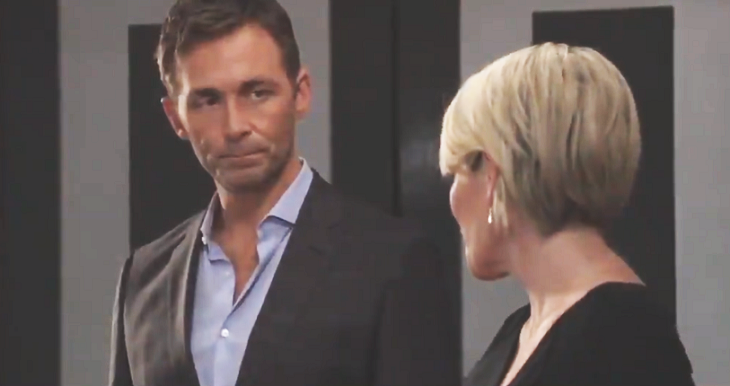 General Hospital spoilers tease that Monday, July 22nd’s episode will be another exciting episode of drama, suspense, and mysteries for fans as new storylines begin and others begin to wind down!

First, Jasper Jacks (Ingo Rademacher) is talking to Nina Reeves (Cynthia Watros) and he seems suspicious of Nina. Perhaps Nina has been doing a little surveillance work and thinks she hasn’t been observed, or Jax has overheard something she has said to someone else, mentioning his name. Jax looks at Nina and asks her, “Why do I get a feeling there’s something you’re not telling me?” More than likely he’s getting that feeling because there is something that she’s not telling him, and she has her reasons for not telling him.

Ava Jerome (Maura West) and Valentin Cassadine (James Patrick Stuart) have a tense run-in. Ava looks like she’s trying to flirt with Valentin as he scowls back down at her, and she asks him if he’s looking for a message from the other side. General Hospital viewers will recall that Valentin and Nina had come to Ava and Sibley Gamble’s (Veronica Cartwright) restaurant table. Nina recognized Sibley as the psychic that her late mother, Madeline Reeves (Donna Mills) used, and she warned Ava that Sibley was a fraud.

But then Sibley had a message from Madeline – to Valentin. She had relayed the message “Use the tweezers next time!” Valentin had a flashback to when he took something from Madeline’s dead body that would have viable DNA for him to be able to fake the DNA test that was supposed to be between Nina and Sasha Gilmore (Sofia Mattsson) so they would match up as mother and daughter. No wonder he’s giving Ava such a dirty look at that remark.

Dr. Neil Byrne (Joe Flanigan) is talking to his friend – or is she his patient – or both? Of course, he’s talking to Alexis Davis (Nancy Lee Grahn). Is he talking about a situation she is asking his advice about, or is he talking about a potential romantic relationship between the two of them as he says, “There’s a way to put it to the test?”

General Hospital viewers will recall a few weeks back when he told her he couldn’t treat her anymore because she knew about the loss of his daughter. Even though she told him it was Diane Miller (Carolyn Hennesy), not herself who did internet research on him.

He had also sought colleague and friend Dr. Kevin Collins’ (Jon Lindstrom) advice on what to do if he found himself getting close to a patient. But then Kristina Corinthos-Davis (Lexi Ainsworth) needed to confess her pledge she’d made to Shiloh Archer (Coby Ryan McLaughlin) to her mother and wanted to do it in a family therapy session so he okayed that. So where do Neil and Alexis go from here?

Jordan Ashford (Briana Nicole Henry) pushes Stella Henry (Vernee Watson) for more info about something. This could be about the relative she found out that she has, other than Curtis Ashford (Donnell Turner) there in Port Charles that the DNA she sent to a genealogy company sent results on. Stella wants to leave it and doesn’t want to know, and Jordan pushes her, asking her if she can honestly say that she is at peace with that?

Laura Webber (Genie Francis) tries to comfort her daughter Lulu Falconeri (Emme Rylan) who is completely blindsided over divorce papers she received from her husband, Dante Falconeri (Dominic Zamprogna). She tells her it boils down to two things: she can either give Dante what he wants, or she can fight for him. Of course, Laura will encourage her to fight for him! Dante, however may be thinking he will never be back to normal again and would rather see Lulu move on and be happy with someone else, than to wait and see if he will ever be healed.

In the meantime, Dante’s parents, Olivia Falconeri Quartermaine (Lisa LoCicero) and Sonny Corinthos (Maurice Benard) are just as blindsided as Lulu is upon hearing the news that Dante sent her divorce papers without even warning or reaching out to them either.

Olivia is very upset as she tells Sonny how bad of condition Dante must be in. She updates him that Dante shot Lulu’s boss. This took place on Monday’s episode, when Maxie Jones (Kirsten Storms) and Peter August (Wes Ramsey) went to visit Dante and he didn’t want to see them. He shot Peter when Maxie tried to storm into the visitation room at the WSB facility.

General Hospital Spoilers: Michael Reflects On What Would Have Been Jonah’s First Birthday https://t.co/o1BVNLdGYm pic.twitter.com/UJc5jCzIBN

Shiloh had already started poking the bear when he bragged about the ELQ shares Oscar Nero Quartermaine (Garren Lake Stitt) had left him. Drew was already upset with him over that, as was Jason. But apparently after Jason left, Shiloh started pushing Drew’s buttons again and enrages him to the point where he pushes him against the bar with his hands around his throat!