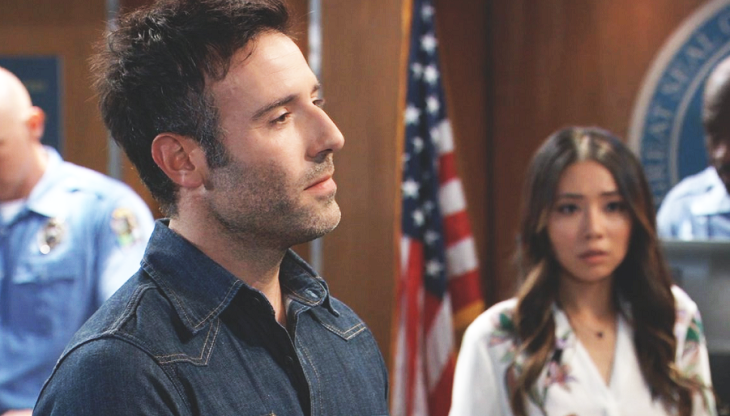 Nina Reeves (Cynthia Watros) and Charlotte Cassadine (Scarlett Fernandez) show up with a gift. Aiden begins to open his gifts and is thrilled with the one Hayden bought him. Liz questions why Hayden didn’t invite Jasper Jacks (Ingo Rademacher). Hayden asks if Finn might show up. Willow Tait (Katelyn McMullen) shows up at the party.

Charlotte and Willow talk about Aiden’s gifts and what she is doing this summer. Nina wants to talk to Willow. Nina rrealized that Shiloh Archer (Coby Ryan McLaughlin) must have overheard her and apologizes. Willow forgives her and says it all worked out. Lulu and Laura talk about Dante Falconeri (Dominic Zamprogna) and how he must feel. A messenger arrives with divorce papers for Lulu.

General Hospital’s Jordan Ashford (Briana Nicole Henry) and Curtis Ashford (Donnell Turner) go to Pentonville to visit Ryan Chamberlain (Jon Lindstrom). Ryan tries to make Jordan feel guilty over the kidney transplant by telling her what could happen to him. Curtis advises Jordan not to let Ryan get to her.

General Hospital News: Here’s What Scarlett Fernandez Has Been Up To

Ryan says they stole the kidney, Curtis tells him multiple witnesses heard him agree as well as saw his signature on the paperwork. Ryan is on the way back to his cell and bumps into Harmony. Harmony starts to throw away the DOD book, Ryan stops her. He promises to let Harmony know his opinion of the book and tells her to tell Nelle Benson (Chloe Lanier) hello for him.

General Hospital’s Willow Tait visits Harmony Miller and tells her Wiley Cooper Jones is safe because of her. Willow tells Harmony that DOD is breaking up. Willow begs Harmony not to let Shiloh pull her back into the fold. Daisy Kwan (Kelsey Wang) stands by as Harrison Chase tells Shiloh the judge has suspended his petition until this trial is over. Shiloh approaches Harmony about recanting her statement. Harmony has finally seen Shiloh for the predator he is. Harmony calls Shiloh a pathetic little man and she will sing like a bird against him about fraud and all.

General Hospital’s Jason and Drew are getting ready to work on the tree-house. Drew thinks Oscar Nero wanted them to share a meal and have a beer together. Jason is very distracted by Oscar leaving ELQ shares to Shiloh Archer (Coby Ryan McLaughlin). He believes it contradicts with Oscar’s choice for the foundation. Jason says this could be tied up in court for years.

Shiloh shows up before Jason can tell Drew that he made bail. Shiloh approaches Drew and wants to put the DOD stuff behind him. He tells Drew he cared for his son when it matters and asks if he has forgotten that. Drew is determined to keep Shiloh from getting his hands on those ELQ shares. Drew has a flashback of Shiloh in an army infirmary bed after their confrontation.

General Hospital’s Kristina Corinthos is visited at work by Sonny Corinthos. Kristina tells Sonny she told Alexis Davis about the pledge and they worked through it. Sonny talks about how strong and resilient Kristina is. Sonny gets a call from his casino. Daisy and Shiloh go to Charle’s to talk to Kristina who tells him she will be testifying against him.

General Hospital’s Shiloh makes bail. Shiloh demands Daisy hire a lawyer for him. Daisy cannot get money from her parents, and the DOD accounts are frozen. Shiloh says it is always darkest before the dawn. He is determined to find someone to help him. Shiloh is discovering that no one is willing to help him so far. Shiloh tells Laura that the two of them will be running Port Charles side by side soon.