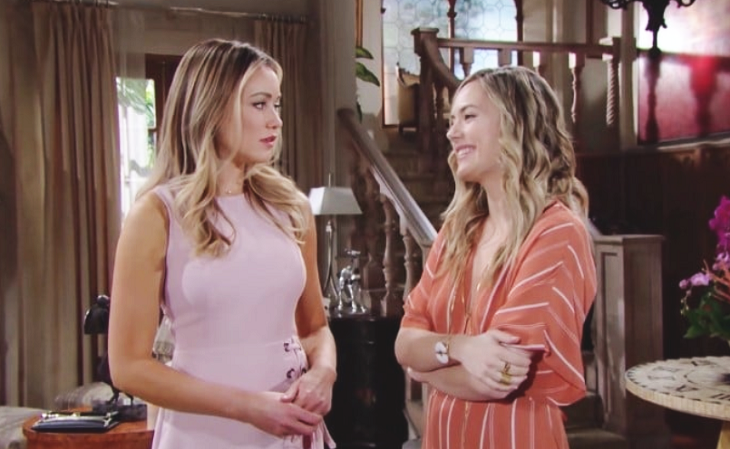 The Bold and the Beautiful (B&B) spoilers tease that Flo Fulton (Katrina Bowden) will learn about Thomas Forrester’s (Matthew Atkinson) past and it causes her to want to spill the truth.

Whatever it is that she learns, is so dark that she decides to tell Hope Logan (Annika Noelle) the truth, even if she ends up spending time in the slammer. Here’s what you need to know about what’s ahead on B&B.

The spoilers don’t say who tells Flo, but we know that she learns something shocking about Thomas. Supposedly, she will learn about how Douglas Forrester (Henry Joseph Samiri) came to be.

Bold And The Beautiful Spoilers – Does She Learn About Caroline Spencer?

Flo will learn that there is a question if Thomas raped Caroline Spencer (Linsey Godfrey) when she was married to Ridge Forrester (Thorsten Kaye).

B&B spoilers say that Caroline was under the influence of a sedative and wine and it caused her to feel loopy. Then Thomas came over to check on her, as she was upset that Ridge wanted to end their relationship. One thing led to another and Thomas and Caroline hot the sheets.

Knowing this, Flo is shocked. She thought Thomas was somewhat of a monster, but this is more than she assumed about him. She rethinks if she wants to stay quiet about the baby secret. It’s all getting so complicated and she isn’t sure what to do about it all.

Bold And The Beautiful Spoilers – Will Flo Fulton Spill To Hope Logan?

After six months of being quiet and allowing Hope to grieve the loss of her daughter, Flo decides it’s time to tell her cousin that Beth is actually alive. B&B spoilers state that she will run to Hope and let her know that her baby is alive and living in Steffy Forrester’s (Jacqueline MacInnes Wood) house as Phoebe.

After waiting for months for this to come out, it’s almost here. And, heads writer and producer Brad Bell says the payoff for this scoop will be well worth it. Look for this all to come out in the next few weeks, as Liam Spencer (Scott Clifton) will start investigating Flo’s medical history during the week of July 22.