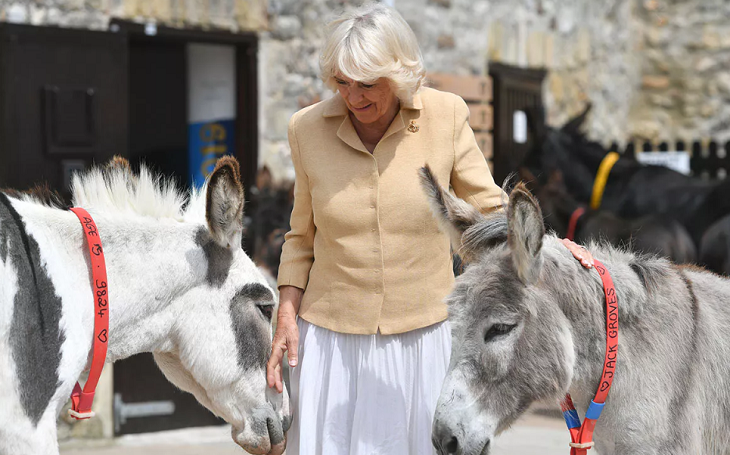 While there’s no doubt that many royal fans have seen plenty of things throughout the years, they’ve definitely haven’t seen anything like this! According to new reports, Camilla Parker Bowles spent her 72nd birthday this past week with Harry and William, but it’s not what you think.

There was actually a different version of Harry and William during a royal engagement that Camilla and Prince Charles attended while in Devon. Here’s what you need to know.

Britain’s The Mirror reports that the Duchess of Cornwall actually had a very lovely day on her birthday, even though it looked like a rather awkward one. Prince Charles and Camilla Parker-Bowles were on hand for a special tour of Devon for their annual trip of the region.

And that’s where they got to spend some time at The Donkey Sanctuary in Sidmouth, where they not only celebrated the charity’s 50th birthday, but where Camilla also got to meet two donkeys named Harry and William. And no, we are not making any of this up, either.

Camilla was gracious enough to take photos with William and Harry, even though it did turn out to look pretty bizarre.

Later on that day the royal couple went to Ginsters, where Camilla got to try to make a few pastries. She said that while it was a little difficult at first, she enjoyed the pastry making experience.

“The crimping is the difficult part – to tuck and roll in a way that the pasty doesn’t get too warm in your hand and to make sure you pinch it at the same time to seal in the ingredients,” Mr Eden, the head chef, told media outlets.

“It is a real skill that takes a while to get the knack of. It was amazing for her to give it a go. It took me ages to learn how to do it properly so for her to do what she did, she did very well. It was better than my first go.”

All in all, it sounds as though Camilla had a fantastic birthday.