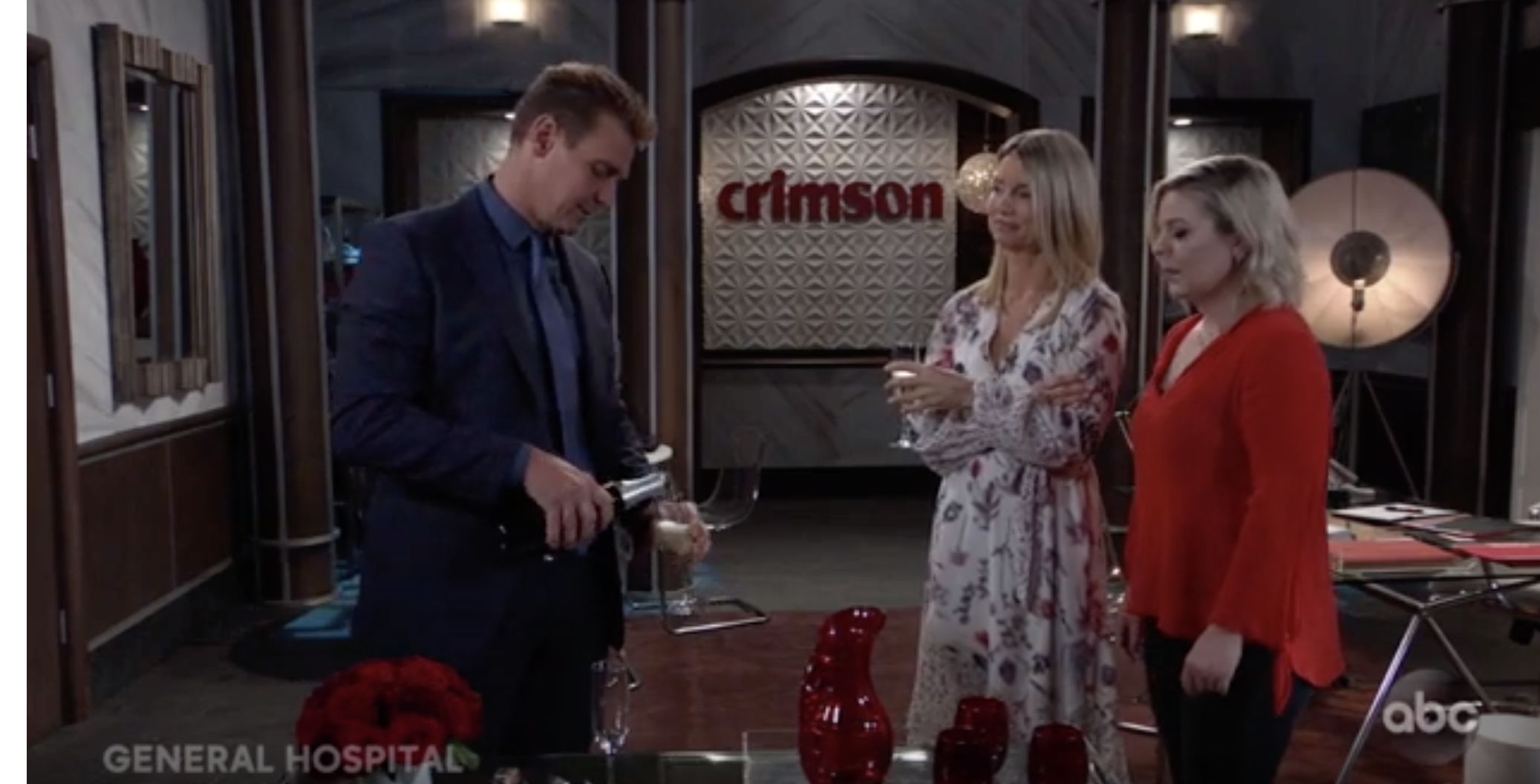 Nina answers the phone in her office at Crimson Magazine and tells the caller, “Great! I can’t wait to see it! Thank you!” Maxie hears Nina’s excited voice on the phone and exclaims, “You did it?” Nina says “YES! Good Morning Port Charles is going to mention Crimson’s special issue in their eight o’clock block tomorrow!

Nina and Maxie jump up and down excitedly and whoop it up, as Jax enters the room with champagne and glasses and closes the door behind him. “Closed-door meeting?” Nina asks Jax; he responds, “Closed-door celebration!”

Maxie interrupts, and tells Jax, “You know what, Peter (Peter August, her boyfriend, played by Wes Ramsey) just got out of the hospital and he’s waiting!” Nina interjects, “Yeah, and my Aunt Liesel- (Liesl Obrecht, played by Kathleen Gati) I promised her I would visit her before work tomorrow.” Jax responds, “Well, see, this is a 2006 excellent vintage.” Nina responds back, “If you insist”.’

Jax tells the two women, “I just saw the projection numbers on “Midnight In The Garden Of Good And Ava”, the special Crimson issue featuring Ava Jerome (Maura West) and tells them that they are going to blow the competition out of the water with the biopic! Nina asks Jax, “And this surprises you?” Jax tells Nina, not at all, and although he loathes the subject of Ava, he never doubted that her story would sell!

Maxie tells Jax that there is just one teeny-tiny problem – the article portrays the REAL AVA, which is exactly what Ava didn’t want, and expresses a concern as to what will happen if Ava doesn’t like it! Jax says, “Too bad. Cheers!” as the three raise a toast to the success of the issue!

Ava Jerome Only Agreed To The Article On One Condition

As General Hospital viewers will recall, Ava had only agreed on the article on one condition – that the story was told the way AVA wanted it to be told, which of course would tell her side of her life and her side of her experiences and her feelings and that her story would be told in her way! Apparently, once Jax talked her into signing the contract with verbal assurances, all he cared about was the financial figures and not Ava’s wishes!

General Hospital Spoilers: Michael Reflects On What Would Have Been Jonah’s First Birthday https://t.co/o1BVNLdGYm pic.twitter.com/UJc5jCzIBN

Does Jasper Jacks Even Realize Who He’s Dealing With?

Jax pulled off quite the coup de grace (the term was originally used for the act of mercy killing) with this feature on Ava, and if he thinks Ava is just going to be quiet and sit still when she reads what was written about her or her sees the Port Charles Morning Show feature he’s wrong – and maybe DEAD wrong!

Maxie described what was written in the feature as THE TRUTH ABOUT AVA, presumably from the PUBLIC’S viewpoint, not from AVA’S VIEWPOINT as she had agreed to! Jax is lucky her big brother Julian Jerome (William DeVry) truly went straight, but Ava herself might retaliate, and when Ava retaliates, it’s not pretty!