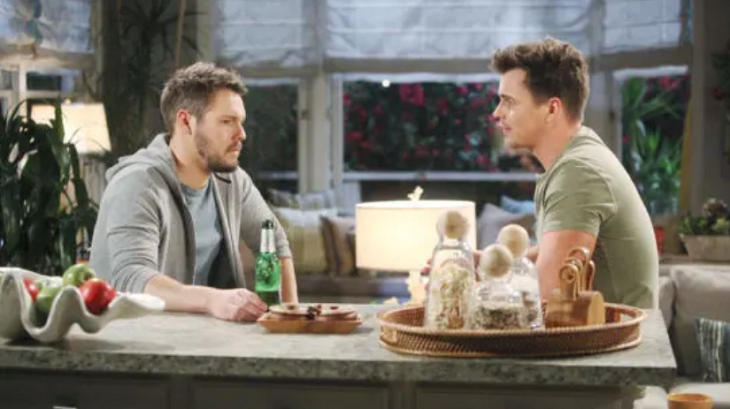 The Bold and the Beautiful spoilers for Tuesday, July 23, tease that Wyatt Spencer (Darin Brooks) will get some unexpected news from his brother Liam Spencer (Scott Clifton). Wyatt, who didn’t attend Hope Forrester (Annika Noelle) and Thomas Forrester’s (Matthew Atkinson) wedding and missed something big that Liam happened to stumble upon.

As B&B viewers know, Liam overheard Thomas and Florence “Flo” Fulton (Katrina Bowden) in the middle of a fierce argument over a “secret.” Liam didn’t hear what the secret was, but he definitely noted that Thomas and Flo weren’t happy with each other, and he heard Thomas essentially threaten Flo by telling her that she’d keep the secret until the day she dies.

On Tuesday’s episode of The Bold and the Beautiful, Liam will contact Wyatt and fill him in on what he heard at the wedding. Liam won’t know where else to turn, and since he doesn’t know Flo well, he’ll be hoping that Wyatt can help. Liam just knows Flo as Phoebe Forrester’s (River Davidson and Madeline Valdez) birth mother, and he’ll want Wyatt to help him figure out what’s going on.

Liam will have to tread carefully with Wyatt, because he knows that Wyatt is quite fond of Flo. He won’t want to cause trouble for the couple, but still he’ll be determined to find out what’s going on between her and Thomas.

He might worry that something wasn’t right with Phoebe’ adoption, which could seriously impact Steffy Forrester’s (Jacqueline MacInnes Wood) life, but he won’t realize that the secret has to do with his own daughter, Beth Spencer.

Ongoing B&B spoilers indicate that Wyatt will agree to help his brother get to the bottom of what’s going on with Thomas and Flo. Of course, for Wyatt, all of this will come as a shock, since he’s been under the mistaken impression that Flo is pristine and wouldn’t keep a secret from him in the way that Sally Spectra (Courtney Hope) did. He’s in for a big shock when the truth finally comes out about Beth!

Bold And The Beautiful Spoilers – Hopes To Consummate The Marriage ASAP

Next, on Tuesday’s new episode of B&B, Hope will be subject to some more manipulation by Thomas. Now that Thomas and Hope are married, Thomas will want to consummate the wedding as soon as possible, despite the fact that Hope has clearly stated that she’s not ready to be intimate with him and doesn’t know when she will be.

Of course, since Thomas is not the most patient person, he’ll want to push Hope along and at least get her to sleep in the same bed as him as soon as possible. In an unsettling move, Thomas will decide to use his son Douglas Forrester (Henry Joseph Samiri) to help him out in his efforts.

Thomas will cajole Douglas to do his bidding and urge Hope to spend the night in his dad’s room, since “mommies and daddies sleep in the same bed.” It will certainly be uncomfortable for Hope, as Douglas approaches her and broaches the subject of everyone’s sleeping arrangements.

Bold and The Beautiful Spoilers: Steffy Tells Liam Story of Phoebe’s Adoption, He Gets Suspicious, Timing Is Off https://t.co/wB8tK4FYrg pic.twitter.com/j3z8DJQAgy

We’ll see if Hope is able to somehow get out of the situation, or if she ends up capitulating and spending the night in Thomas’ room. She might explain to Douglas that sometimes mommies and daddies don’t sleep in the same bed, which might work, but something tells us that Thomas will finagle a way to get Hope to stay with him for the night.