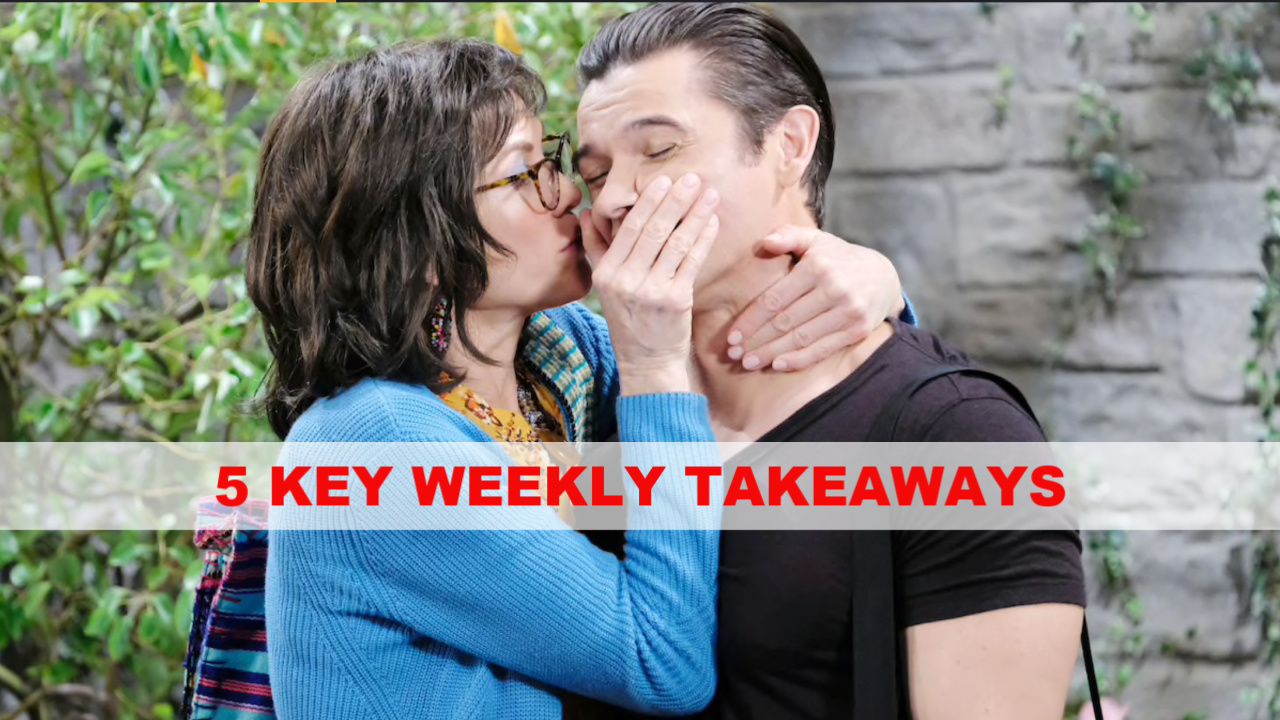 Xander Kiriakis (Paul Telfer) and Kristen DiMera (Stacy Haiduk) part ways when Xander ends his partnership with Kristen forever! Xander is so upset with Kristen and so tired of her shenanigans and control manipulations over him that he forces her to grovel, after finally giving her back her Nicole Walker (Adrienne Zucker) mask. She was forced by Xander to masquerade as the rather homely Susan Banks (Stacy Haiduk) instead of the lovely, full-figured Nicole.

After being embarrassed by having to answer her door in a Lucha Libre, or Mexican Wrestling mask to Gabi Hernandez (Camila Banus) last week, which Xander had given her and then she returned to him disguised as Susan Banks. Later she had to think quick when the real Susan arrived, pointing a gun at her! This likely causes Kristen to mouth off at Xander yet again, and he lets her know who’s boss – and it’s not her – and probably tells her where to go and how to get there! This has been a long time coming, with Xander getting more and more fed up with Kristen!

Stefan DiMera (Brandon Barash) and Gabi strategize to come up with various ways to get Stefan out of trouble with the law, as both know that it’s a frame-up, but just have not been able to prove it yet. Nicole is their first person of interest, having put together all the bizarre behavior from her refusing to let Gabi bring the champagne from the wine cellar underneath the DiMera mansion and claiming she couldn’t find it, to Gabi seeing Nicole open her door with a Lucha Libre mask on, and possibly having heard around the Kiriakis manse some talk about Susan Banks showing up with a Lucha Libre mask she regifted Xander with!

After Gabi gives Stefan disappointing news, probably that she was unable to get Kate DiMera (Lauren Koslow) to change her story about Stefan kidnapping her and Ted Laurent (Gilles Marini), Stefan will try bargaining with Kate. Lani Price (Sal Stowers) will see inconsistencies in Ted’s statements, however, and this may lead to Stefan being released from jail as the Days of Our Lives weekly preview shows Stefan and Gabi wanting to get married by the end of the week!

Days Of Our Lives Rumor: Haley Has Disturbing Visions Of Claire – Is She Suffering From PTSD? https://t.co/kSZaKtemtt pic.twitter.com/jpJzwn1Kbc

3) The Old Jack Deveraux May Be On The Way Back, But Eve Donovan Won’t Like It!

Jack Deveraux (Matthew Ashford) has decided he wants to get his memory back, but he hasn’t been able to convince Eve Deveraux (Kassie DePaiva) that it’s really about wanting to rebuild a relationship with his children only, and not Jennifer Horton (Melissa Reeves).

Jack is at first surprised when Eve seemingly changes her mind and supports his taking the memory serum, but later is angered when he discovers that Eve has given him a placebo even though Xander gets her the real serum, which she probably is planning to destroy! He witnesses her in an act of betrayal, and as shown in the Days of Our Lives weekly video, by the end of the week he will want a divorce, and Eve will attack him! In the meantime, Jennifer will be determined to move on from Jack and set up a date with Dr. Henry Shah (Andre Khabazzi)!

Wash, rinse and repeat as the Rex Brady (Kyle Lowder), Sarah Horton Brady (Linsey Godfrey), and Eric Brady (Greg Vaughan) potential love triangle continues, but with Xander thrown in the mix as well! Rex and Sarah decide to move out of Eric’s apartment, which may make things a little easier between the trio, but considering that Rex and Xander get into it over Sarah with Eric and Sarah showed in the background of the Days of Our Lives weekly video and Rex rushing Xander and threatening to kill him.

Days Of Our Lives Spoilers: Gabi Has Disappointing News For Stefan https://t.co/2McrRWDaFP pic.twitter.com/ds2uAECJyG

Perhaps trying to get away from Eric didn’t really help that much since he is plainly in the background of the scene! It looks like Rex and Sarah must move into the Kiriakis mansion since Xander gets into the mix! Then Rex witnesses a close moment between Eric and Sarah, and Sarah makes a monumental slip of the tongue, possibly about Eric!

Haley Chen (Thia Megia) starts developing symptoms of post-traumatic stress disorder, seeing Claire Brady (Olivia Rose Keegan) light matches and stab Tripp Dalton (Lucas Adams) both in nightmares and when awake! Tripp recognizes the symptoms and tries to help her himself, because even though he tells her she needs professional help because he has gone through the same thing, she doesn’t want to see anyone at the hospital because she works there and she doesn’t want her boyfriend JJ Deveraux (Casey Moss) to know either, since he might worry that she could become suicidal over it. Lucas goes to Dr. Shah and gets tranquilizers in his name and gives them to Haley hoping she will sleep soundly enough not to have nightmares.