Days Of Our Lives Spoilers: Rex And Sarah Make A Big Move 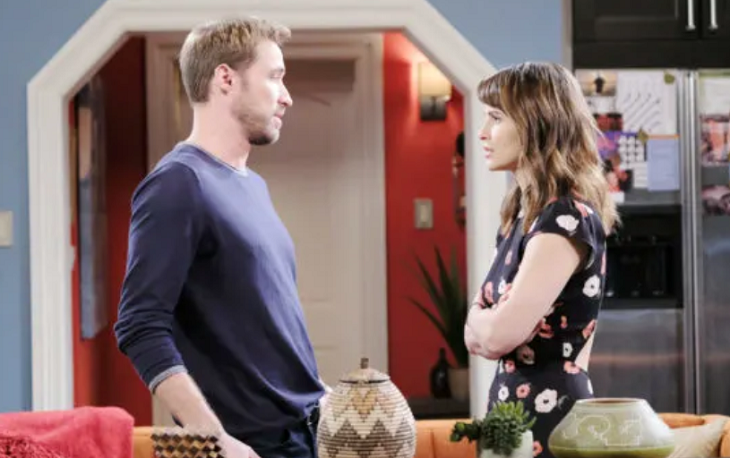 Days Of Our Lives spoilers tease that Rex and Sarah Horton Brady (Kyle Lowder, Linsey Godfrey) will decide to move out of Eric Brady’s (Greg Vaughan) apartment this week. This will be after having a discussion with Eric about how he considered leaving Salem because of his pain over “Nicole Walker” (Adrienne Zucker) and other issues unknown to Rex.

The other issue is well known to Eric and Sarah, namely their attraction to each other that they have been trying to fight off, somewhat unsuccessfully in spite of her marriage to Rex.

Rex and Sarah know that they need to move out into their own place and let Eric have his apartment to himself. It has been very awkward for the two newlyweds to be canoodling and all of a sudden Eric walks in like a third wheel in his own home!

There have of course been some rather embarrassing close calls once in a while. The two undoubtedly have discussed Eric’s talking about moving not only out of the apartment, but leaving town, and they talked him into staying. But both wonder if underneath all that talk, he needs his own living space back.

Days of Our Lives Spoilers: Brady Corners Xander, Demands The Truth Or Else! https://t.co/1Wesknd51m pic.twitter.com/LkqNhzlwey

Rex and Sarah are newlyweds. They need their privacy and their own space to learn the ins and outs of each other’s personalities, likes and dislikes. They need to be able to keep their home the way they prefer it, with all the things that go into building a life together, such as decorating, buying the furniture they both agree on.

They need to just be able to jump in the shower together with no fear of an unintended interruption by a roommate, regardless if the roommate is a family member. If they have a disagreement, or even a loud argument, they don’t need Eric coming in the middle to mediate. They need to work out their differences with each other on their own!

Days Of Our Lives Spoilers – What About Any Future Plans To Have Children?

Even though Rex and Sarah may not be planning on having children in their immediate future, it may be something that happens down the line, and Eric may not be interested in becoming a built-in babysitter.

Besides, if they were still all living in the same space, that space would become even more inconvenient and crowded, if not downright noisy, if there were a baby sharing it with them. Eric undoubtedly would love having a little one around and be happy to share in the care of a little Rex or a little Sarah, but still Eric would not have a life and a love of his own, and it wouldn’t be fair to him.

Then there’s that awkward attraction between Eric and Sarah that they are trying to ignore, fight off, and hide within themselves from Rex. Even though Sarah’s marrying Rex has thrown him off the track for the time being, it is difficult to fight someone out of one’s system in the presence of a new spouse. The longer Rex and Sarah and Eric all live together, the better the chance that Sarah and Eric’s secret desires and attraction to each other could start showing on the surface. And that would not be a good thing at all!