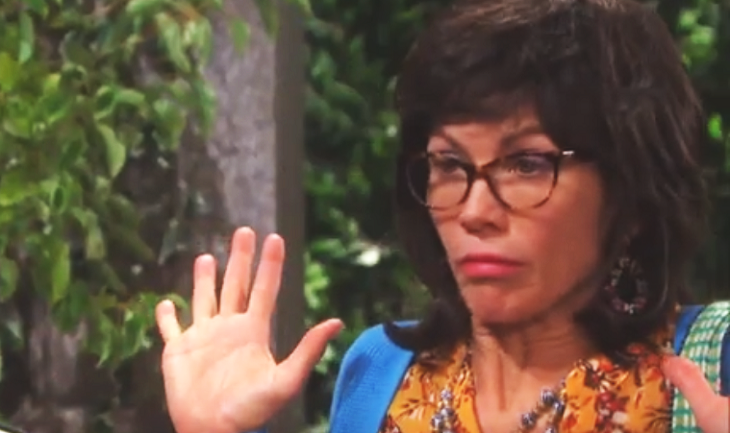 “Days of Our Lives” spoilers for Tuesday, July 23, tease that Susan Banks (Stacy Haiduk) will fume over Kristen DiMera’s (Stacy Haiduk) return. She just ran into a disguised Kristen in the park, so she’ll whip out her gun and rage at her lookalike enemy.

Of course, Kristen will quickly come up with an alternate explanation. She’ll insist Susan’s got it all wrong and blurt out that she’s actually Sister Mary Moira Banks (Stacy Haiduk).

“Sister Mary Moira” will fib that she left the convent and chased after a man she was smitten with. “Days of Our Lives” spoilers say an ecstatic Susan will put the gun away and likely point out it wasn’t loaded. Once Susan’s satisfied and all caught up, she’ll dash off and leave Kristen to finish her dealings with Xander Cook (Paul Telfer). Kristen will get her mask back, but she’ll also get a stern warning.

DOOL fans can expect Xander’s vicious side to come out once more as he lets Kristen know their alliance is finished. He’ll make it clear that he could ruin her if she tries to pull anything else. Next, Ted Laurent (Gilles Marini) will be interrogated by Lani Price (Sal Stowers). “Days of Our Lives” spoilers say Ted will have some bullets to dodge as Lani pokes holes in his statement.

Ted will do whatever he can to explain the inconsistencies and hope Lani backs off. However, Lani is a thorough detective with good instincts. She can tell something’s off about Ted and Kate Roberts’ (Lauren Koslow) accusations, so she has no intention of letting this go.

In Kate’s hotel room, Stefan DiMera (Brandon Barash) will barge in and seek some kind of agreement. “Days” spoilers state that Stefan will want the truth, which Kate will naturally be reluctant to give. Her kids are facing death threats thanks to Kristen, so Kate will want to be careful.

Stefan will talk about Gabi Hernandez’s theory that “Nicole Walker” (Arianne Zucker) is behind the deception and push Kate to come clean. He’ll think they can make a deal and help each other, but Kate will be wary of straying from her own plan to destroy Kristen. This is a mess that’s only going to get messier for all parties involved.

Across town, Rex Brady (Kyle Lowder) and Sarah Brady (Linsey Godfrey) will decide to tell Eric Brady (Greg Vaughan) that they’re officially moving out. They’ll think it’s time to find their own place and give Eric his own space again, but Eric should have mixed emotions about Sarah not being around anymore.