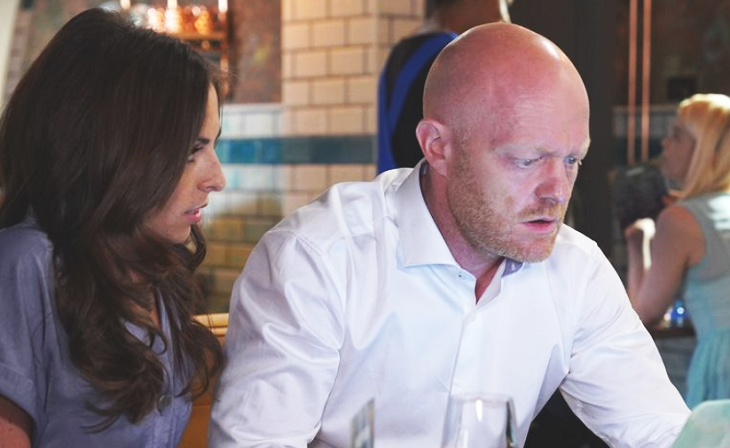 On “EastEnders” this week, viewers will see Max Branning (Jake Wood) develop a special relationship with Ruby Allen (Louisa Lytton). Max will also go through a lot of drama this week as he reels from the effects of losing baby Abi.

Max and Ruby will be turning heads and raising eyebrows as they engage in a surprise love affair, which will stir drama in Albert Square. It all starts when Max helps Ruby with her business plans.

The pair discovers that they have a lot in common, and they are both excited to pursue whatever it is that they may have. But there’s a catch. Ruby has no clue that Max has a history with her best friend Stacey and when the Stacey finds out, there’s going to be trouble.

EastEnders Spoilers – Trouble Ahead When He Runs Into Rainie Branning

According to a source of Metro.co.uk, “Ruby and Max are an electric match and the chemistry between them is undeniable, but it’s safe to say they’ll have some obstacles coming their way.

“Ruby is completely oblivious about Max’s history with her best mate Stacey, and it’s only a matter of time before she finds out but just what will Stacey make of the pairing?”

Apart from her steamy love affair with Ruby, he might get himself into trouble once he and Rainie Branning (Tanya Franks) cross paths again. Viewers of “EastEnders” may recall that vowed to kill her for disappearing with baby Abi. Max had been trying to contact her to no avail. Because of that, he’s been drowning his sorrows with alcohol and told Kathy that he’d kill Rainie if she ever dares to show her face in town again.

EastEnders Spoilers – Will Newfound Romance Last Or Is It Just A Fling?

But it’s not only Abi that she stole from, she also got her hands on Jack Branning’s (Scott Maslen) money. Unfortunately, Rainie lost the money she stole, and she had no choice but to return to the Square.

She dragged Stuart Highway (Ricky Champ) into her scheme to trick men to pay up in return for sex. She’ll ask them to pay up first and when she had the money, Stuart will show up to scare them away.

However, she ended up getting beaten by a man for not wanting to have sex with him and Stuart was nowhere in sight, as he was busy helping a pensioner in need. Will Max find out Rainie is back in the Square? Will his newfound romance with Ruby last or will it just be a fling?