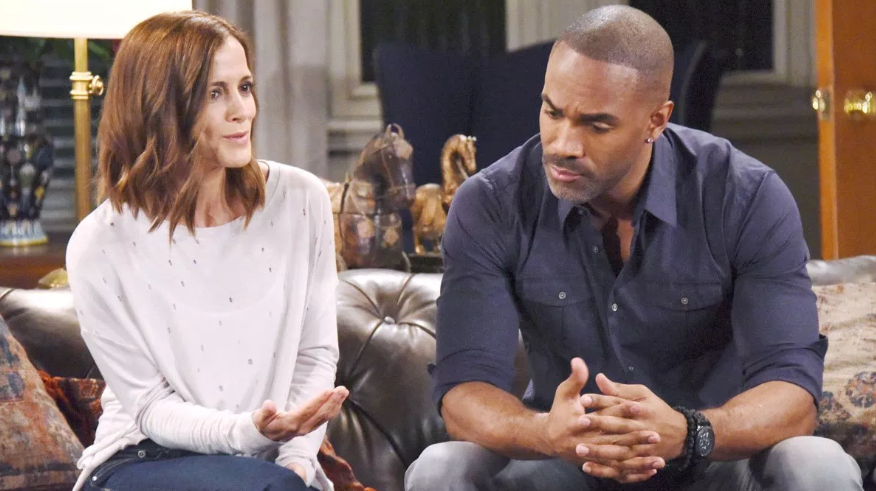 General Hospital spoilers tease that Hayden Barnes (Rebecca Budig) will finally have a chance to catch up with her old friend Curtis Ashford (Donnell Turner) this week on General Hospital, and give him a sincere apology!

Long time General Hospital viewers will remember that it was Hayden who first brought Curtis to Port Charles in November 2015, after being his being referred to her by Shawn Butler (Sean Blakemore).

Hayden had been shot and was in a coma for a period of time, and Shawn was blamed for it. But Hayden had gone to visit him in prison to tell him that the bullet retrieved from her head did not match his gun. Shawn was relieved that he had not put her into that coma after all. She didn’t want to tell Shawn who the person was that actually shot her, for fear he would come after her again.

So he told her his old friend Curtis would investigate and find the bullet that actually came from Shawn’s gun in the walls of the Haunted Star. That is how Curtis and Hayden became acquainted and during the time she remained in Port Charles and she became good friends with Curtis.

When Hayden left town, she never said goodbye to Curtis, or her fiancé at the time, Dr. Hamilton Finn (Michael Easton) or her half-sister Elizabeth Webber Baldwin (Rebecca Herbst). She failed to show up at her wedding to Finn, and just disappeared, pregnant with Finn’s baby. No one ever heard from her until last November, when she mailed a letter to Finn in care of Curtis, asking him to meet her in Rome.

He declined, instead going with Anna Devane (Finola Hughes) to Cuba, where they captured Liesel Obrecht (Kathleen Gati). She had been a fugitive on the run for kidnapping and nearly killing Peter August (Wes Ramsey) who she had hidden in a cabin, tied to a bed, and starved and tortured as revenge for the death of her son, Nathan West (Ryan Paevey).

General Hospital Spoilers – Curtis Ashford Had Been Looking For Her

General Hospital viewers may recall Curtis mentioning that he could try to find Hayden to Finn, but Finn never wanted to pursue it, and so neither Finn nor Curtis knew where she was, or even if she or Finn’s and her baby was alive until she sent Curtis the letter for Finn last November.

Curtis, undoubtedly worried about her and why she would just seem to drop off the face of the earth without contacting them. Hayden did speak to Finn briefly a couple of times since returning to Port Charles in time to attend her half-sister Elizabeth and Franco Baldwin’s (Roger Howarth) wedding reception. She shocked everyone by showing up with no advance warning!

She also made time to catch up with Laura Webber Collins (Genie Francis). And even though she is working in the same offices as Curtis, as new Chief Financial Officer of Aurora Media’s print division, she really hasn’t had a chance to sit down and catch up with him. So she will likely make that time now and apologize to Curtis for disappearing and not keeping in touch with him.