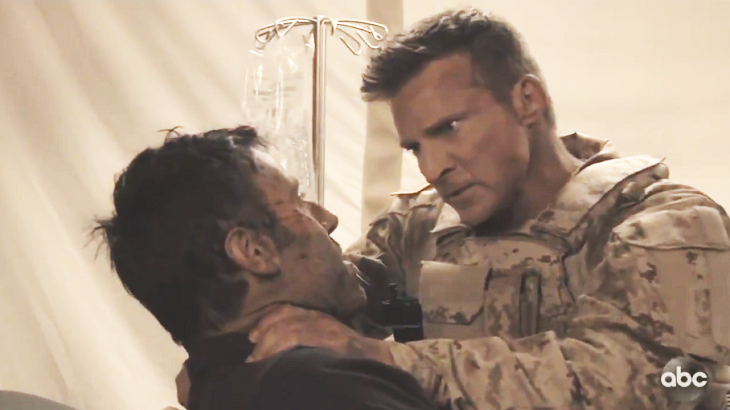 Curtis and Jordan start to kiss and are interrupted by Stella Henry (Vernee Watson). Stella has brought groceries, Curtis leaves to bring barbeque home. Stella warns Jordan not to overexert herself. Jordan wonders if Stella has checked into the DNA match anymore. Stella doesn’t care about some unknown relative, Jordan doesn’t believe her. Stella has already paid for the information, but the other party hasn’t. Jordan offers to look into this for Stella.

General Hospital’s Lulu Falconeri (Emme Rylan) tells Laura Webber (Genie Frances) that the divorce papers claim desertion. Lulu is upset that Dante won’t even speak to her. Laura knows that Dante loves Lulu; she can’t imagine Dante wouldn’t even say goodbye. Lulu says Dante did say goodbye, she didn’t listen. Laura tells Lulu she has twenty days to decide what to do about her marriage. Lulu doesn’t know how to make this decision. Laura offers her advice on how to proceed.

Olivia wants Lulu to tear up the divorce papers; Sonny asks if Lulu is going to give Dante the divorce. Sonny believes that Dante thinks this is the only thing she can do. Olivia says Lulu cannot give up on Dante like this; Laura tells Olivia they have to support Lulu’s decision. Olivia and Sonny go back to his house. Sonny warns Olivia that Dante might cut himself off from them as well.

General Hospital’s Jasper Jacks (Indo Rademacher) wants to celebrate with Nina Reeves (Cynthia Watros) and Maxie West (Kirsten Storms). Maxie is afraid that Ava will have an issue with the article. Nina assures Jax that she can handle Ava.

Ava and Valentin arrive at Crimson, Nina doesn’t want to party anymore. Jax wants to know why Nina glossed over so much of Ava’s history. Nina tells Jax that the idea was to tell Ava’s story in Ava’s words. Nina is sure Ava will get what she deserves. Jax accuses Nina of keeping secrets; she suggests Jax is keeping secrets and mentions Cassandra Pierce.

General Hospital’s Ava Jerome (Maura West) and Valentin Cassadine (James Patrick Stuart) discuss Sibley Gamble (Veronica Cartwright). Valentin wonders if Sibley is the real thing. Ava wants to know when she gets to see the magazine, Maxie assure her as soon as it arrives from the printers. Valentin suggests that Ava can’t wait to see the cover.

The three of them burst into Nina’s office as she and Jax argue. Nina tells Ava that she will get a copy of Crimson as soon as it arrives and ushers her out. Maxie talks Ava to the elevator and says she wants Kiki Jerome’s (Eden McCoy) approval. Valentin asks Jax what he and Nina were arguing about, Valentin says you.

General Hospital’s Alexis Davis (Nancy Lee Grahn) is talking to Neil Byrne, and Alexis is afraid of what traits she might have passed on to Kristina. Neil questions why Alexis is avoiding the subject of her and men. Neil reminds Alexis that their original meeting had to do with her choices in men and asks if that is no longer a concern. Alexis wasn’t aware that there were only certain subjects that could be discussed.

Neil tells Alexis there is one way they can test this issue. Neil tells Alexis to go out on a date to see if she can avoid toxic men. Alexis says that not dating does the same thing. Neil questions if Alexis is ready to give up on relationships altogether. Alexis says it is always disappointing to date. Neil says he and Alexis have more to talk about in therapy. Alexis gets a message that Shiloh made bail.

General Hospital’s Shiloh Archer (Coby Ryan McLaughlin) remembers Drew Cain (Billy Miller) saying it was a mistake to pull him out of the accident wreckage. Drew pulled Shiloh out first, and another man died because of it. Drew approaches Shiloh, who brings up the ELQ shares again. He tells Shiloh to keep his son’s name out of his mouth. Curtis stops Drew’s attack.  Shiloh’s flashbacks reveal that he is guilty of treason. He tried to get Drew to join him with his treason scheme, but Drew refused and planned to seek justice against Shiloh.