Young And The Restless Spoilers Tuesday, July 23: Adam Offers A Deal – Sharon & Chelsea Clash – Kyle Owns Up To His Past 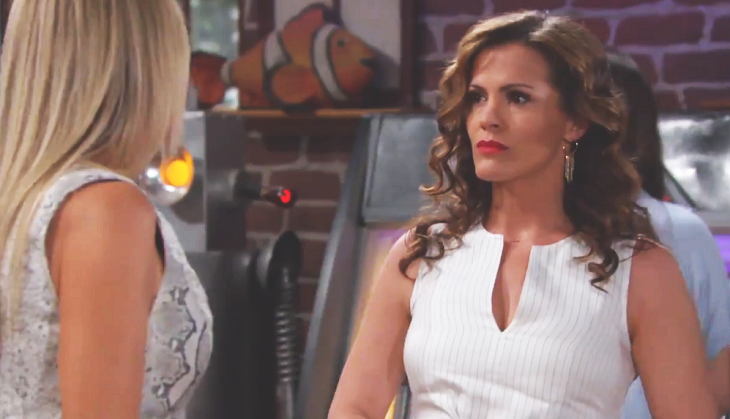 The Young and the Restless spoilers for Tuesday, July 23, tease that things will get heated during Christian Newman’s (Jamie and Alister Tobias) custody hearing. Nick Newman (Joshua Morrow) will try to explain why he impersonated JT Hellstrom (Thad Luckinbill) – he’ll argue that he did it to draw JT out from hiding and that the Newman family has since forgiven him and that’s all that matters. However, the judge won’t like it and he’ll wonder about Christian’s home environment.

Adam Newman (Mark Grossman) and Nick will argue viciously in front of the judge, trading insults and each questioning the other’s ability to be a fit parent. Adam will maintain that the JT video is indicative of Nick’s character, while Nick brings up Delia Abbott’s (Sophie Pollono) death and Adam’s coverup. The hearing will end with the judge promising to review all the information.

Next, on Y&R, Abby Newman (Melissa Ordway) and Phyllis Summers (Michelle Stafford) will meet at Society. Abby will propose that the first floor of Phyllis’ new hotel should be a lounge, which Phyllis will be intrigued by. Still, she’ll have reservations about working with Abby, but Abby will convince her to go for it, and the two women will shake hands.

Young And The Restless Spoilers – Summer Newman Starts To Get Worried

Later, Phyllis and Theo Vanderway (Tyler Johnson) will meet at Society, and Theo will have some ideas for the hotel. He’ll suggest naming the hotel the “Grand Phoenix” after Phyllis, who rose from the ashes after the Jabot debacle. He’ll also provide her with the names of 15 celebrities whom he can get to attend the grand opening of the hotel.

Young And The Restless Spoilers: Michael And Lauren Marriage In Trouble https://t.co/jAK4QEMejD pic.twitter.com/YaEssMGx4Y

Soon, Summer Newman (Hunter King) will show up and want to talk to Theo alone. She’ll tell him that it’s weird that he’s working with Phyllis. But Theo won’t take Summer’s hint about not working with her mother, and he’ll suggest that she network at the opening and that it will be fun. Meanwhile, Phyllis will call someone and ask them to go forward with the “second acquisition” that they discussed.

Next, on Y&R, Kyle Abbott (Michael Mealor) and Lola Rosales (Sasha Calle) will have a serious discussion on the patio at Crimson Lights. Lola will want to know about his past, and Kyle will fill her in on the details about how he partied a lot and used – and was used by – a lot of women. Lola will find the whole thing sad and she’ll remark that she sees a different side of him when he’s around Theo. But Kyle will maintain that he wants no part of Theo or that lifestyle anymore.

Next, on Y&R, Sharon Newman (Sharon Case) and Chelsea Lawson (Melissa Claire Egan) will have words in the main area at Crimson Lights. Sharon will remark that she heard Chelsea was back in town and she’ll muse that Chelsea has returned to the scene of the crime. Chelsea will apologize for hitting her over the head, and Sharon will thank her for taking responsibility.

Young And The Restless Spoilers – Fierce Argument About Adam Newman

The ladies will then argue about Adam, with each thinking the other is responsible for Adam’s current behavior. Chelsea will remark that Sharon’s really the only person who can convince Adam to not act on his worst impulses. Sharon will say that she already tried to do that and that she can’t do it anymore. However later, Sharon will go to Adam’s penthouse and almost knock on the door before she leaves.

Finally, on Tuesday’s new episode of Y&R, Nick will arrive home after the custody hearing, followed a bit later by Adam, who bursts into the house. Adam will needle Nick by saying that he’ll make Christian’s transition as smooth as possible, and Nick will tell him that pride comes before the fall. Chelsea will intervene and suggest that they find a solution to this dispute.

In response, Adam will offer to stop seeking custody of Christian if Chelsea goes back to the penthouse with him, but Chelsea will flatly refuse. The men will argue and insult each other until Chelsea tells them to stop it and Christian wanders into the room. Adam and Nick will argue some more, and Nick will tell Adam that he should watch the JT video again and to remember exactly who he’s dealing with.