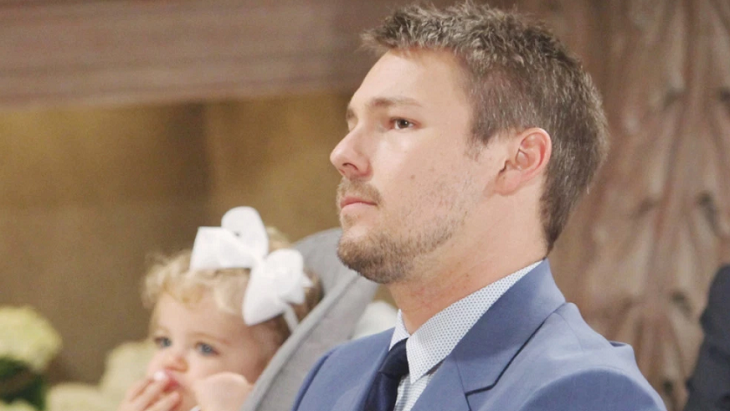 The Bold and the Beautiful spoilers tease that Liam Spencer (Scott Clifton) is doing whatever he can to get his wife Hope Logan (Annika Noelle) back. Why? Because he knows that Hope isn’t in love with Thomas Forrester (Matthew Atkinson).

Liam also knows Thomas is manipulating her to be his “replacement wife” after his ex Caroline Spencer died. And now that Liam believes someone might be hiding something about their dead daughter, he is now more determined than ever before to find out the truth about what really happened that fateful night on Catalina Island. Here’s what you need to know.

According to CBS Soaps in Depth, Liam is about to act like a possessed man after he overhears a very interesting conversation between Thomas and a drunk Flo Fulton (Katrina Bowden).

Bold And The Beautiful Spoilers – Liam Spencer’s Curiosity Is Piqued

Unfortunately, Thomas is so hell-bent on making sure that Liam and Hope never find out that their baby is alive that he even went as far as to threaten to kill Flo, should she say anything to anyone about Baby Beth.

Naturally, Liam’s curiosity is now piqued, but what he doesn’t realize is that the secret in question revolves around his own daughter. With that said, he decides to do a little investigating on his own by going back to what happened the day that Hope gave birth.

Liam will recruit his brother Wyatt Spencer (Darin Brooks) to subtly get any information he can from Flo. He also wants to find out more information about Steffy Forrester’s (Jacqueline MacInnes Wood) adopted daughter and even asks her to see Phoebe’s adoption papers. Clearly, Liam is not going to rest until he gets to the bottom of this.

These two are officially husband and wife! #BoldandBeautiful pic.twitter.com/7KyUIypFqc

Needless to say, if there is one person who is determined to get in Liam’s away, it’s most certainly Thomas Forrester. It’s going to be one very explosive fight between these two men, that’s for sure. Fans will have to tune in for all of the action!