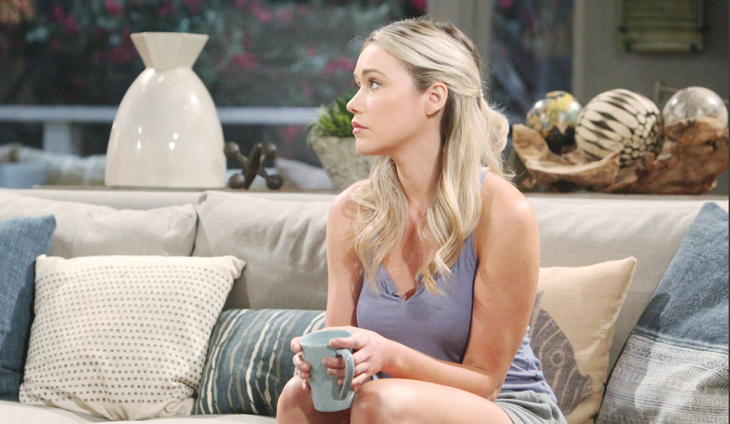 The Bold and the Beautiful spoilers for Wednesday, July 24, tease that Wyatt Spencer (Darin Brooks) will get a big shock. He’s just had an apparent breakthrough with Florence “Flo” Fulton (Katrina Bowden). As B&B viewers know, he got tipped off by his brother Liam Spencer (Scott Clifton) about a mysterious secret that Flo and Thomas Forrester (Matthew Atkinson) were keeping. Now Flo seems poised to tell Wyatt everything about what’s going on.

Since ongoing B&B spoilers indicate that the baby swap storyline is going to continue on for several weeks, look for something or someone to stop Flo from spilling all of her secrets to Wyatt on Wednesday’s episode.

Perhaps Flo will get another threatening text from Thomas, or maybe she’ll just have a moment of clarity and realize that she doesn’t want to lose Wyatt, which will certainly happen if she tells the truth about Beth Spencer being alive.

As B&B viewers know, Flo’s well-aware that Wyatt broke off his relationship with Sally Spectra (Courtney Hope) after he found out that Sally was keeping a secret with Thomas. Wyatt doesn’t like secrets, and Flo knows that he has a preconceived notion that she’s an honest and trustworthy person. She won’t want to shatter his perception of her, so she’ll stop short of telling Wyatt the whole truth about her role in Reese Buckingham’s (Wayne Brady) baby swap and adoption scam.

But no matter what happens to prevent Flo from telling Wyatt the whole truth, B&B spoilers say Flo will nevertheless end up saying something she shouldn’t. She won’t give up that Beth is alive and living as Phoebe Forrester (River Davidson and Madeline Valdez), but she’ll accidentally reveal a crucial detail about her past that will absolutely stun Wyatt. Exactly what that detail is remains to be seen, but it will be major.

One possibility is that Flo will let it slip that she has a connection to Reese, who Wyatt knows delivered Hope Forrester (Annika Noelle) and Liam’s daughter Beth. That would qualify as a crucial detail, and it would certainly dumbfound Wyatt. We’ll see how Wyatt reacts to Flo’s revelation, and what he does from there.

Look for Wyatt to report back to Liam about what he’s learned from Flo, and for Liam to use that information to further his investigation into what Thomas is holding over Flo. Things should get exciting from here!

Meanwhile, Brooke Forrester (Katherine Kelly Lang) will check in with Hope. Brooke will probably be concerned about her daughter, given that Hope has just married a man she’s admittedly not in love with. She’ll spend some time comforting Hope, who will be thinking about Beth.

As B&B viewers will remember, Hope was deeply affected when Phoebe crawled up to her during the wedding ceremony and called her “mama.” She hasn’t been able to get her mind off the incident, and it will lead her to miss everything that she would have had with Beth. Brooke will offer her support, while Hope continues to feel melancholy on what should be a happy evening.