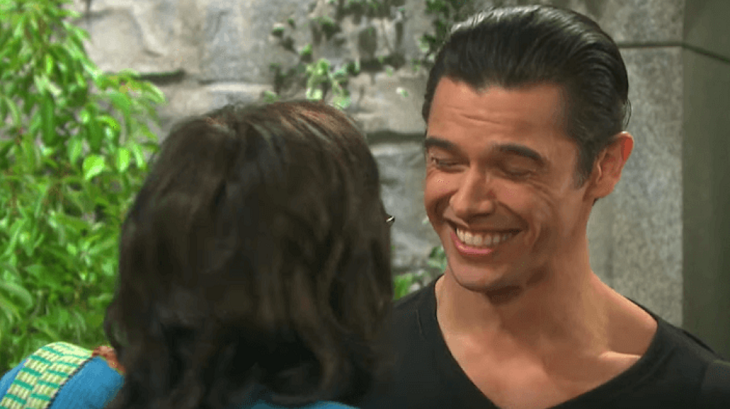 Rex Brady walks in and says he knows what is going on and is surprised he hasn’t seen it before now. Sarah tells Rex nothing is going on between her and Eric; he knows but doesn’t know why she feels the need to explain. Sarah and Eric discuss her and Rex’s mother. She says she cheated in her heart with Eric. Sarah tells Rex it is time they move out of Eric’s. Eric will not miss her makeup all over his counter.

Days of Our Lives Stefan DiMera (Brandon Barash) confronts Kate in her hotel room. Stefan tells Kate he knows she is working with Nicole Walker (Arianne Zucker). He offers Kate whatever she wants to explain why she is going this; Kate says she had no choice. Kate tries to throw Stefan out; he refuses to go.

Stefan offers to help Kate; he will keep her safe, and they will be free if she confides in him. Kate asks why she would trust Stefan when Rex interrupts. Kate thinks about Kristen’s threat and says that Stefan is lying. Kate gives a statement about the run-in with Stefan. Rex and Kate talk about Kate’s comments to Eric. Kate thinks Maggie should be treating Rex better as well. Stefan and Lani bump into each other, and she threatens to arrest him again.

Days of Our Lives Ted Laurant (Gilles Marini) calls Kate back as Lani Price (Sal Stowers) approaches him. Lani wants details from Ted; she needs more than just Xander’s statement. Lani wants Ted to confirm Kate’s statement. Ted wants to read over his statement before he comments. Ted finally makes it to Kate’s room to check on her. Kate was tempted to tell Stefan the truth, but he’s no match for Kristen. Ted wants to know what Kate told Lani. Kate said she heard Stefan talking to Xander.

Days of Our Lives Xander Cook (Paul Telfer) tries to take his briefcase away from Brady Black (Eric Martsolf). Brady demands Xander open the briefcase. Xander shows Brady some files. Brady asks why Xander didn’t show him this before now. He says it wasn’t finished checking it out yet. Maggie Kiriakis (Suzanne Rogers) interrupts and wants Brady to go with him to a meeting. Maggie isn’t sure she can trust Xander.

Days of Our Lives Susan Banks (Stacy Haiduk) realizes she is talking to Kristen DiMera (Stacy Haiduk) and pulls a gun on her. Susan yells for the police, Kristen tries to fool Susan. Kristen claims to be the nun sister instead of Kristen. Kristen pretends to have left the convent but says he has separated from her boyfriend. Xander comes back to meet Kristen, and she demands the mask back.

Days of Our Lives #DOOL Spoilers: Jennifer Horton Is Moving On! @celebratesoaps https://t.co/XLM7hYuaZA

Kristen can’t get close to Brady without the mask. Kristen curses Xander for messing with her. Susan approaches Maggie and Brady in the square and tells them goodbye. Maggie is shocked by Brady and Susan’s exchange. Maggie and Brady go to check on Xander. Meanwhile, Kristen tells Xander she is done working with him. Kristen says now that Stefan is out of the way, no one can stop her from taking over Dimera. Xander threatens to blow her out of the water.