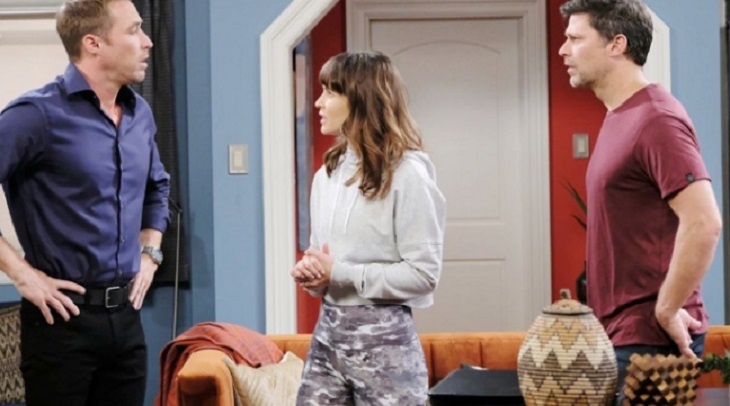 Days Of Our Lives spoilers tease that Rex Brady (Kyle Lowder) will soon witness a close moment between his brother Eric Brady (Greg Vaughan) and his new bride Sarah Horton Brady (Linsey Godfrey), and when Sarah tries to explain it away to Rex, she’ll put her foot in her mouth and make things even worse!

As Days of Our Lives viewers know, the decision Sarah made to marry Rex in spite of she and Eric’s strong emotional bond and physical attraction to each other was a poor one. She should have delayed her marriage until Eric was out of her system, and she out of his.

But at the time, the woman nearly everyone in Salem thought and still thinks to be Eric’s lost love Nicole Walker (Adrienne Zucker), who had been presumed dead, showed up at his apartment just as Sarah was getting ready to break up with Rex and confess her feelings to Eric!

No one could have predicted what would happen after “Nicole” found out her daughter Holly Jonas (Scarlett and Harlow Mallory) had been kidnapped and then died, and she would totally reject Eric, blaming him for her death! Of course, as Days of Our Lives viewers know and Kate DiMera (Lauren Koslow), Ted Laurent (Gilles Marini) and Xander Kiriakis (Paul Telfer) know, it’s not Nicole, and Holly is alive, although her location has not yet been revealed!

There is no telling what Rex’s reaction will be when he witnesses this close moment between the two and Sarah royally goofs up everything by telling too much information; look what happened when Rex got mad at Xander over Sarah! Rex was ready, willing, and able to end Xander for good, and even told him so! In the most recent Days of Our Lives weekly preview video, he absolutely exploded with rage!

Could Rex get that angry at his own brother, or even at Sarah herself? If he does, then she will understand that her mother Maggie Kiriakis (Suzanne Rogers) was right about Rex; even if he promised to be true to her, his history doesn’t bear it out, and if she has to be afraid of his temper besides, that’s a definite hard pass on staying married to Rex! What if he does more than yell and he goes ballistic and gets physical with his anger against her?

Or, will Rex fly into a rage at Eric? Will he try to end him in a flying ball of rage like he exhibited against Xander? Meek and mild Eric is the twin of Sami Brady DiMera (Alison Sweeney) so even though Days of Our Lives viewers don’t see Eric good and mad and getting in physical altercations with others very often, he probably has some of his sister Sami in him somewhere, and he just might find himself opening his mouth and Sami coming out, if nothing else! But Eric’s a pretty big guy, so he probably can defend himself adequately if the need arises!

Days Of Our Lives Spoilers: Jack Makes A Life-Changing Decision – He Wants His Memories Back #days #dool #daysofourliveshttps://t.co/9b5Hud40eS

Days of Our Lives Spoilers – Will Jealous Rex Turn To Another Woman?

Rex might just act on his baser lustful instincts and revert to his player ways, with a good bet being on Rex and Chloe Lane (Nadia Bjorlin) having a fling, and possibly even leaving Salem and running off together, considering both actors are leaving the Days of Our Lives canvas, although it’s not for sure that they leave at the same time! However, the possibility does exist!