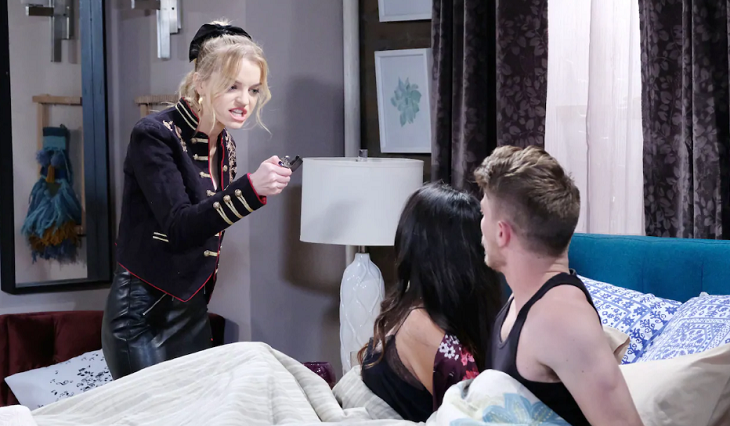 Claire tormented several Salemites thanks to her mental issues, but now it’s Haley’s turn to be tormented in her own mind. She’ll have some awful nightmares and perhaps some hallucinations that explore incredibly dark themes.

Haley’s heart will be racing as she imagines Claire going after her as well as Tripp Dalton (Lucas Adams). DOOL spoilers say Claire will pull out a knife in one of these visions and stab Tripp in the back with it. Haley will be quite rattled thanks to these creepy images in her head. She’ll receive support from Tripp, who’ll end up getting his hands on some tranquilizers for Haley by the end of the week.

Across town, Xander Cook (Paul Telfer) will provoke Rex Brady’s (Kyle Lowder) wrath. “Days” spoilers say they’ll spar over Sarah Brady (Linsey Godfrey), so DOOL fans can expect things to escalate quickly. It won’t be long until Rex delivers a fierce threat and physically attacks Xander. Eric Brady (Greg Vaughan) will be there to hopefully ease the tension and send these two to their corners.

Over with Jack Deveraux (Matthew Ashford), he’ll be taken aback when Eve Deveraux (Kassie DePaiva) changes her tune about the serum. “Days of Our Lives” spoilers state that Eve will decide to give Jack her full support, so he’ll wonder what prompted this sudden change of heart.

Eve will probably indicate that she mulled it over and determined that their love could conquer all. She may also point out that she knows how much Jack wants this. Eve will claim she doesn’t want to hold Jack back, but she’ll clearly be lying.

The truth is Eve will plan to swap out the real serum for a phony one that won’t bring Jack’s memories back. That betrayal will send Jack into a rage this Friday!

Until then, Jennifer Horton (Melissa Reeves) will get back in the game. She’ll plan to go out with Henry Shah (Andre Khabbazi), the handsome doctor who always seems to be available when Jenn’s in need of a date!

Days Of Our Lives Spoilers: Jennifer Sets Up A Date – Is She Trying To Make Jack Jealous? https://t.co/bBmvUyGkGh pic.twitter.com/sMT06oD60l

“Days of Our Lives” spoilers say poor Henry could be setting himself for heartache all over again. It’s just a matter of time until Jack and Jennifer find their way back to each other.