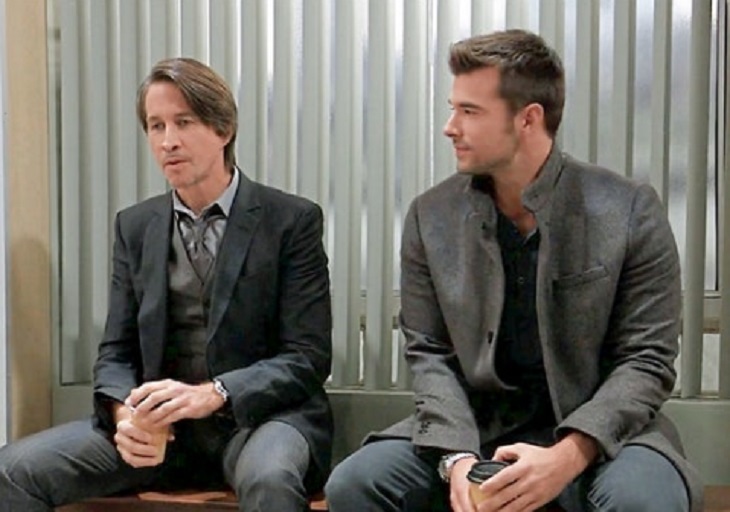 The two have not really sat down and had a whole conversation in quite a while, with Finn being busy with everything from chasing down an engagement ring that made a loop from him to Robert Scorpio (Tristan Rogers) to Yvonne Godfrey (Janet Hubert) and back to himself and finally to Anna Devane’s (FInola Hughes) finger, to chasing down a kidney in an elaborate plan with many players for Jordan Ashford (Briana Nicole Henry) from Ryan Chamberlain (Jon Lindstrom)!

Chase meanwhile, as a cop, of course, has been “on the chase” after Ryan Chamberlain, Shiloh Archer (Coby Ryan McLaughlin) and in a more pleasant meaning of the word “chase”, chasing after his girlfriend Willow Tait (Katelyn MacMullen)!

The two have barely encountered each other until Chase brought Hayden Barnes (Rebecca Budig) in for questioning in the case of Liesl Obrecht (Kathleen Gati) being pushed overboard off the Haunted Star when Liesl accused Hayden, and Chase finding out that Hayden was once engaged to his brother, and wondering why Finn never told him and felt shut out of his life again over it!

This in fact may be what Finn and Chase are reconnecting over, so Finn can explain about how he came to have been engaged to Hayden and possibly tell him about that part of his life between leaving home and moving to Port Charles. It’s doubtful that Chase even knows his brother had been struggling with Blackwood’s Syndrome, a fatal disease, as long time General Hospital viewers will recall, Finn finally came up with a cure from using a serum created from his therapy animal Roxie, a bearded dragon!

He also struggled with an addiction to an illegal drug, “Zen Zen” which he had used to battle the pain he experienced and which Hayden helped him get free from after the Blackwood’s Syndrome, which had killed his previous wife Reiko, had been cured. This is what led to Hayden and Finn becoming close and eventually falling in love with one another.

The dysfunction between the two brothers has never been fully explored by General Hospital writers, other than it involving their father, Dr. Gregory Chase (James Read) having married Chase’s mother shortly—perhaps a little TOO shortly—after the death of Finn’s mother.

Other General Hospital spoilers have teased that perhaps the elder Chase had been cheating on Finn’s mother with Chase’s mother, leading to Finn’s hatred of his father, or possibly even a more convoluted situation where Chase’s mother could have been Finn’s girlfriend at the same time, and Finn could actually even be Chase’s father! Any of those things could have caused the rift between father Gregory and son Finn to be serious enough that Finn even changed his last name, using his mother’s maiden name Finn instead of his father’s last name Chase.

However, Finn has become more and more accepting of Chase in recent times, and has realized that it wasn’t Chase’s fault he was born regardless of how shameful the circumstances may have been that brought his existence about!