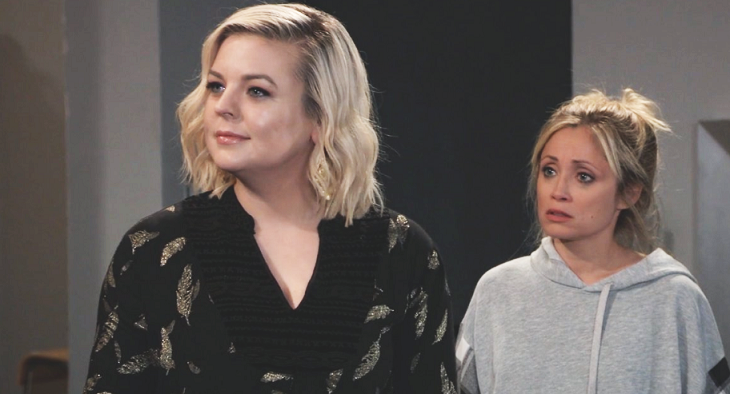 Sonny updates Carly on the happenings of the evening and Carly realizes he has a lot on him. Sonny and Carly talk about Josslyn Jacks (Eden McCoy) and how well she gets along with Dev (Ashton Arbab). Carly thinks Sonny is being proactive. Sonny tells Carly how perceptive she is being.

General Hospital’s Maxie West (Kirsten Storms) and Peter August (Wes Ramsey) visit Lulu, who closes the door in their faces. Maxie beats on the door until Lulu lets them in and she shows them the divorce papers. Maxie tells Lulu she needs to put on her little black dress and go drinking with her. She  wants Lulu to change clothes and go out to talk. Maxie says Lulu needs to get away from these reminders of Dante Falconeri (Dominic Zamprogna).

Maxie wants Peter to sit with Rocco Falconeri (O’Neill Monahan). Rocco plays a game and then tells Peter it is time for a story. Rocco doesn’t want his mom to worry. Peter reads to Rocco before he goes to bed. Rocco is upset that Peter changes the story. Rocco thinks Dante left because he doesn’t know how to be a dad. Rocco is mad at his dad. Peter tells Rocco that he never had a mom. Peter says he was mad at his mom for a really long time. Peter explained that it has nothing to do with him.

Meanwhile, General Hospital’s Maxie and Lulu bump into Dustin Phillips (Mark Lawson). Lulu tells Dustin about the divorce papers after he tries to cheer her up. Dustin tells Lulu her husband is a fool to let her go. Dustin says he should go and leaves. Maxie apologizes for dragging Lulu out tonight. Peter and Rocco are asleep on the couch when they arrive home.

General Hospital’s Dev offers to drive Joss where she needs to go. Joss tells Dev that he doesn’t have a valid license. Dev can steal a car and drive it, that makes him an expert. Joss is yelling at Dev over his comment when Trina Robinson (Sydney McKayla) and Cameron Webber (William Lipton) approach. Joss says they were talking about a speed boat. Dev says he will check next time.

General Hospital Spoilers – The Lock Is Missing From The Bridge

Cameron and Trina offer to buy them coffee. Joss talks about the compass and how she likes to keep it close. Joss wants to get to the point of thinking about Oscar and not getting upset. Cameron is at the footbridge and has orders to cut off the locks. Trina tells Dev that Joss is probably at the footbridge when he expresses concern. Joss discovers the lock is missing from the bridge. Dev gets to Jocelyn and asks why she is upset. Joss explains to Dev about the lock. Dev holds Jocelyn as she cries.

Finn asks if Hayden is considering buying a place, she says maybe and maybe not. Valentin approaches Finn and needs to talk to Anna Devane (Finola Hughes) about Cassandra Pierce (Jessica Tuck). Finn wants to know why Cassandra is an issue before he asks Anna to call him. Valentin doesn’t want Nina involved, Finn doesn’t either. Finn calls Anna about the conversation with Valentin.

General Hospital’s Valentin Cassadine (James Patrick Stuart) and Curtis Ashford (Donnell Turner) meet. Curtis says he had to look through Jasper Jacks (Ingo Rademacher) files again. Curtis questions if Valentin’s relationship with Cassandra should be on Jax’s radar. Hayden joins Curtis and apologizes to him. Curtis tells Hayden that Finn was ready to forgive her for taking off.

Curtis wants to know what Hayden has been up to since she left. Hayden worries that Finn won’t be receptive of her moving back to town. Curtis brings up the baby that Hayden claims she lost. Curtis respects Hayden’s boundaries and doesn’t pry.