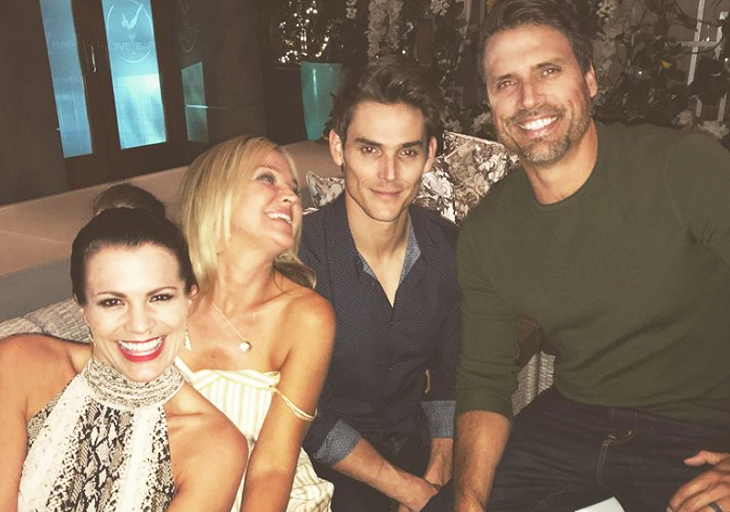 The Young and the Restless fans have been loving all of the renewed energy on the show. As a matter of fact, many viewers were thrilled when actress Melissa Claire Egan (Chelsea Newman) came back to the show, along with the new Adam Newman (Mark Grossman), Kevin Fisher (Greg Rikaart) and many more.

And while everyone doesn’t get along in front of the cameras, off screen it’s a different story. Here’s what you need to know.

Egan shared a photo of her, Grossman, Joshua Morrow (Nick Newman) and Sharon Case (Sharon Newman) enjoying some quality time together. She captioned it with, “What a tangled web we weave. Happy Friday everyone! Watch The Young and the Restless.”

Young And The Restless Spoilers – Fans Happy To Welcome Egan Back

Now only does it look like a tangled weave, but a quite beautiful weave, too. Seriously, how does the soap world manage to get so many ridiculously beautiful looking actors and actresses?!

A lot of Egan’s fans commented on the photo with, “So glad your back Melissa, Y&R is awesome with such a great cast,” along with, “Happy Friday Melissa, you look smokin hot, I love your dress. Brings out your beautiful eyes.”

Another fan wrote, “Well have to say love this group. And I’m glad you are back on #YR, wasn’t the same without you!”

It looks like most viewers agree with us that it’s great to see some fan favorites back on the canvas. With that said, we have a feeling that things are about to get pretty intense for Chelsea, as she will soon find herself in the middle of Adam and Nick’s custody battle of little Christian.

As we all know, the Newmans aren’t the kind of people who are willing to compromise. It’s going to be a fight to the very end with both Nick and Adam doing whatever they can to win this battle.

It’s a good thing that everyone is smiling in this photo, right? Because once the cameras start rolling it’s going to be a very different story. We can’t wait!