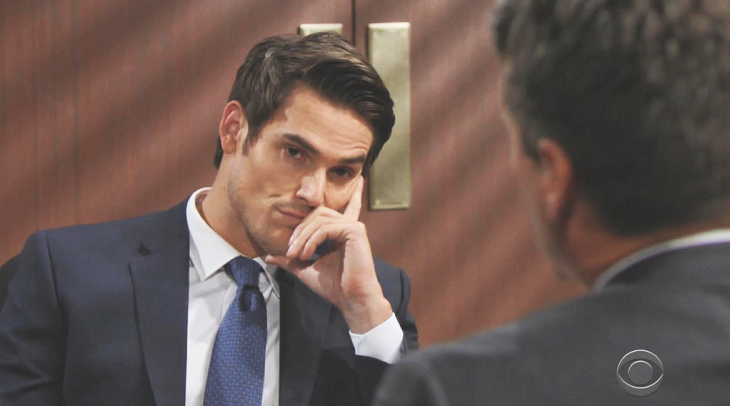 “The Young and the Restless” (YR) recap for Tuesday, July 23, 2019 reveals that over in the courtroom, Nick Newman (Joshua Morrow) argues that Adam Newman (Mark Grossman) planted the video to make him look bad. He explains he did it to lure J.T. Hellstrom (Thad Luckinbill) out in the open – the family’s forgiven him and that’s all that matters. The judge disagrees and questions the environment in which the child would be raised. Nick complains Adam took his company and tried to trade it for his son. The men argue with raised voices.

Adam wonders where Christian was when Nick was running around in the J.T. mask and Nick hollers that Adam wrote the book on cruel and ruthless. Adam says the video is concrete evidence of Nick’s character, and Nick counters that Adam lies and manipulates his way out of everything…except Delia Abbott (Sophie Pollono). They rehash the accident and Adam’s cover-up. The judge needs time to review the new information and adjourns the hearing.

At home, Summer Newman (Hunter King) looks at the story about her father with dismay.

At Society, Y&R’s Phyllis Summers (Michelle Stafford) looks at the Nick Newman’s story and tells Abby Newman (Melissa Ordway) it’s no coincidence this is coming out the morning of the custody hearing. Abby agrees; it has Adam Newman written all over it. They discuss Abby’s proposed deal.

Young And The Restless POLL: Who Is Using Delia’s Memory To Mess With Billy’s Mind? Vote Now!

She pictures the first floor of Phyllis’ hotel as a lounge. Phyllis doesn’t hate it, but wonders why should she do business with her? Abby thinks they need one another and notes she’s going into business with her, not her family. Phyllis decides ‘what the hell’ and they shake on it.

After, Phyllis meets with Theo (Tyler Johnson), who suggests the Grand Phoenix as the hotel name since she rose from the ashes after Jabot. He impresses her by texting 15 A-list names to attend the opening. Summer Newman arrives and pulls him away. She complains it’s weird he’s working with her mother, but Theo thinks she’s smart. Summer doesn’t need more drama. Theo suggests she network at the hotel opening, which could be fun. Across the room, Phyllis calls someone to pull the trigger on the second acquisition they discussed.

Young And The Restless Spoilers – Kyle Abbott Admits He Is Scared

On Crimson Lights’ patio, Kyle Abbott (Michael Mealor) admits to Lola Rosales (Sasha Calle) it scared him that his past might make her back out of marrying him. Lola apologizes. Kyle opens up about his fast partying lifestyle – it was fun and there were lots of women. They used each other.

Lola thinks it’s sad and feels it was because of Summer Newman – it always comes back to her. Kyle denies it and recalls meeting Lola – in her smile he saw…everything. Lola sees a different side of him with Theo. Kyle says he’s vapid and self-absorbed – he wants no part of it.

Inside, Sharon Newman (Sharon Case) turns to see Chelsea Newman (Melissa Claire Egan) and says, “I heard you were back in town. Returning to the scene of the crime?” Chelsea apologizes for knocking her unconscious and putting her in the hospital. Sharon thanks her for owning up to it. They argue about which of them put Adam on his current path and Chelsea thinks for Adam, it’s always been Sharon – even Victor Newman (Eric Braeden) knew she could get through to him.

Young And The Restless Spoilers – Sharon Newman Changes Her Mind

Chelsea wants Sharon to steer him away from his worst impulses. Sharon tried and can’t do it anymore. Chelsea scoffs at Sharon suggesting she reason with him, and worries if he rips Christian away from Nick Newman, he’ll cross a line; hurting his kids, and will be a lost cause. She realizes Sharon will never believe that – it’s why she needs to talk him out of this. Later, Sharon arrives at Adam’s penthouse, changes her mind about knocking, and leaves.

At home, Nick Newman explains the video to Chelsea Newman – he’s really concerned he may lose Christian. Chelsea is reassuring him when Adam Newman busts in. He promises to make the transition as smooth and painless as possible. Nick notes pride comes before the fall. Chelsea tells Adam she saw Sharon Newman earlier; she was angry. Adam says he hasn’t talked to her. Chelsea wants to find a solution regarding Christian.

Adam offers to drop the custody fight if Chelsea comes back to the penthouse with him. Chelsea won’t go anywhere with him. Adam and Nick resume trading insults until Chelsea orders them to stop and Christian appears. Chelsea takes the boy for a drink and the men square off. Nick suggests Adam to watch the video again and remember who he’s dealing with. And that’s a wrap.