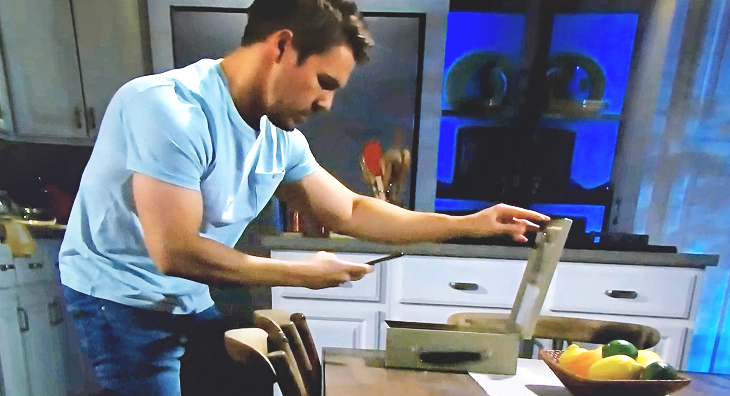 The Bold and the Beautiful spoilers for Thursday, July 25, tease that Wyatt Spencer (Darin Brooks) will find himself in complete shock. Florence “Flo” Fulton (Katrina Bowden) will break down and be on the verge of confessing everything to him. As B&B viewers know, Flo is feeling extremely guilty about her role in Reese Buckingham’s (Wayne Brady) baby swap and adoption scam, and she desperately wants to get it off her chest.

However, B&B spoilers say that Flo will then receive another text message from Thomas Forrester (Matthew Atkinson), threatening her to keep quiet. This will snap Flo back to reality and she’ll quickly consider the consequences of telling the truth about Beth Spencer/Phoebe Forrester (River Davidson and Madeline Valdez).

As Wyatt and Flo continue to talk, Wyatt will beg Flo to let him help her. During the course of their conversation, B&B spoilers say that Flo will reveal a crucial detail. She’ll be emotional and say something about wanting to experience things with Wyatt that she never has before…like getting married and having a baby, among other things.

That will puzzle Wyatt, since Flo will make it sound like she’s never given birth. Wyatt will question her about her statement, and Flo will cover by talking about how painful it was to give up her baby and hand her over to Steffy Forrester (Jacqueline MacInnes Wood), but Wyatt will remain suspicious.

The Bold and the Beautiful Spoilers: Is Thomas Going To A Mental Hospital Or Prison? https://t.co/WnVmqodHEs pic.twitter.com/SgGKFc2bby

Meanwhile on The Bold and the Beautiful, Liam Spencer (Scott Clifton) will talk with Steffy at the cliff house and ask her some questions about Flo. Liam will share that Flo was there after Thomas and Hope Forrester’s (Annika Noelle) wedding and was acting emotional, but Steffy won’t know what the issue might have been. Liam will say that he thinks they should know more about Phoebe’s birth mom.

Later, Wyatt will update Liam about the development with Flo, and Liam will wonder what Flo’s statement making it sound like she never gave birth might have to do with her secret with Thomas.

Bold And The Beautiful Spoilers – Brooke Forrester Pushes For Annulment

Wyatt will also share that Flo even mentioned how she might need to go back to Las Vegas, and Liam will surmise that she’s afraid and tell Wyatt to find out the secret. Liam will then search around at the cliff house until he finds Phoebe’s adoption documents.

Finally, on Thursday’s new episode of B&B, Brooke Forrester (Katherine Kelly Lang) will chat with Hope Forrester (Annika Noelle) downstairs. As B&B viewers know, Hope has just refused to sleep with Thomas, and she’s got a lot on her mind.

Brooke will urge her daughter to get an annulment, but Hope will refuse. Hope will explain that part of the reason she married Thomas was to set boundaries, and that she can’t keep wishing that Phoebe was Beth. Brooke will comfort her daughter. Later, Hope will sit alone, thinking about her life with Liam and when she was expecting Beth.