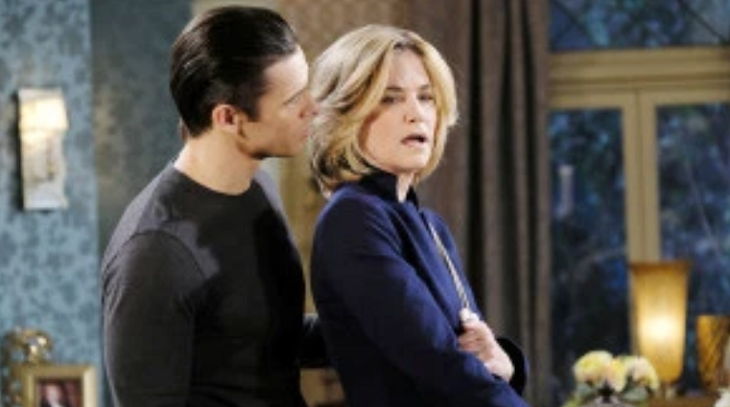 Days of Our Lives spoilers tease that Xander Cook (Paul Telfer) will bring Eve Deveraux (Kassie DePaiva) the real memory serum. Eve will probably want to keep her husband Jack Deveraux (Matthew Ashford) from getting his hands on it, in an effort to keep him from remembering his love for Jennifer Horton (Melissa Reeves) this week.

Eve is very insecure where her relationship and marriage to Jack is concerned. That is probably because she is losing control over him, and he is rapidly becoming less of a blank slate that she can mold to her preferences, and more his own man. He has even expressed that he is resentful of her control and that he wants to be his own man with his own thoughts and making his own decisions.

Eve remembers back when Jack and Jennifer were the fail-safe forever couple of Salem, in spite of the many challenges to their courtship, marriage and relationship with each other, including his previous disappearances, and three times previously having faked his death.

Jack’s heart is influencing his mind, and Eve can’t have that. She wants to continue to control and influence his mind, because she knows if Jack were really the old Jack he would have nothing to do with her. Eve did apparently tell him about their short previous marriage in which he was just helping her to get an inheritance she was owed, as she mentioned to him in a recent episode.

Jack has of late started to regain some of his own instincts and personality, as witnessed by his forcing Eve to drop arson charges against Ben Weston (Robert Scott Wilson) when Claire Brady (Olivia Rose Keegan) was proven to be the real arsonist.

Eve’s greatest fear is losing Jack. She craves the power and prestige that being the mayor’s wife and Police Commissioner gives her. And there are plenty of reasons for her to fear losing him – her relationship with him is built on lies.

Days Of Our Lives Spoilers – Hiding The Serum From Jack Deveraux

The very act of her taking a man who had none of his own memories, and then taking that blank slate and molding him into the image of what she wants is all lies. No wonder she doesn’t want him hanging around his children, his ex-wife, or anyone else that could fill in the blanks for him of the man he used to be, risking the real Jack coming back.

Eve knows if anyone could find and get away with stealing the batch of Dr. Wilhelm Rolf’s (William Utay) memory serum that was recreated in the Salem University Hospital labs in order to reverse-engineer an antidote for Will Horton’s (Chandler Massey) brain tumor, Xander can!

Days Of Our Lives Spoilers: Jack Makes A Life-Changing Decision – He Wants His Memories Back #days #dool #daysofourliveshttps://t.co/9b5Hud40eS

Unlike Eve, Xander would know how to get into the hospital’s security system and disable it so that he would not be shown on security cameras as he looks for the serum. Although he will likely disguise himself as well, since it is a 24 hour hospital with personnel there at all times. Xander finds the serum and brings it back to Eve. She will try to hide it and put it under lock and key from Jack, so that there is no chance of him using it, therefore reducing the risk of Eve losing him forever.