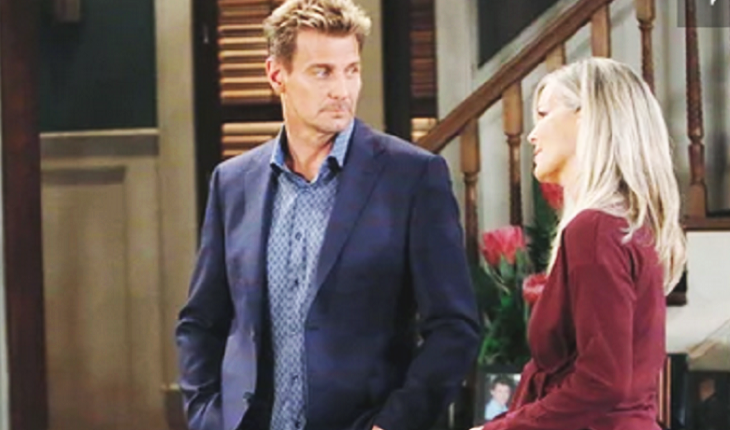 As General Hospital viewers may have noticed, Jax and Carly have been keeping their distance from one another lately, although it may not be intentional. Jax wasn’t even seen near Josslyn aboard the Haunted Star last week at Franco and Elizabeth Baldwin’s (Roger Howarth, Rebecca Herbst) wedding celebration. Although that may have been unintentional as well.

She didn’t want to go at first and then later changed her mind and showed up by herself after her friends were already there. Joss was the one twho spotted Liesel Obrecht (Kathleen Gati) in the water overboard. Jax didn’t even know Joss had arrived until she and her friends came in the ballroom and shouted for help. Then Jax and Curtis Ashford (Donnell Turner) jumped in to save a struggling Liesel. Sonny Corinthos (Maurice Benard) and Carly weren’t in attendance at all

Jax has been busy with Crimson-related things such as getting the new issue and its main feature into print, “Midnight In The Garden Of Good And Ava.” He’s also been pursuing his investigations of Valentin Cassadine (James Patrick Stuart) and Cassandra Pierce (Jessica Tuck).

Jax has been getting his office staff in gear and things running smoothly, including Maxie Jones (Kirsten Storms) and Nina Reeves (Cynthia Watros), who has butted heads with him several times, as has Valentin!

Carly, in the meantime has been busy with way too much on her plate, including Josslyn and all things related to her, their new “relative” Dev Cerci (Ashton Arbab). She’s been trying to help him get situated and acclimated to the American way of life, both at home and at the Metro Court, where she has given him a job. Plus the issues going on with Sonny’s and her new baby, and the potential issues he or she may have associated with the diagnosis of spina bifida.

Jax and Carly will probably run into each other accidentally in the Metro Court, possibly as he is there in the restaurant. They will likely take a few minutes to catch up and discuss what is currently going on in their daughter’s life.

Joss finally seems to be coping with the fact that her boyfriend, the late Oscar Nero Quartermaine (Garren Lake Stitt) is gone forever, and that he would have wanted her to start moving on beyond him with her life by this time. He would want her to be happy and not sad and cooped up in the house all the time by her own choice.

Jax and Carly may discuss the new baby as well, Dev, and other things with Jax’s business and Carly may even wonder to him how in the world he got involved with Hayden Barnes (Rebecca Budig) and why he hired her. Carly knows the trouble Hayden made in the past and will ask if Jax knows what he’s doing!