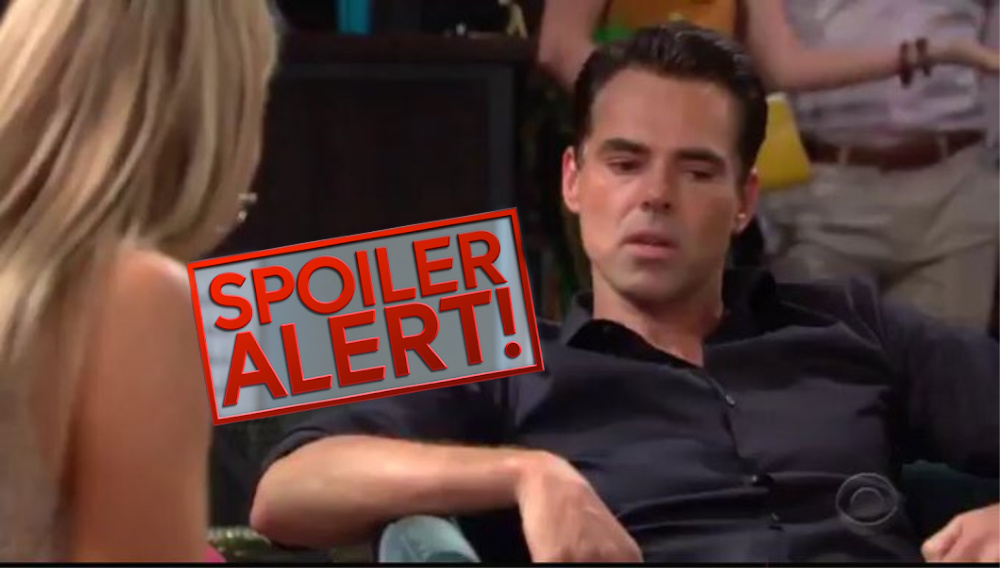 “The Young and the Restless” spoilers for Thursday, July 25, tease that Billy Abbott (Jason Thompson) will remain tormented by his tremendous loss. At Crimson Lights, Billy looks up ghost information on the Internet before Kevin Fisher (Greg Rikaart) walks in. Kevin understands what Billy’s going through and thinks he should talk to somebody. Opening up helped Kevin after Delia Abbott (Sophie Pollono) first died.

Meanwhile, the judge decides Victoria Newman (Amelia Heinle) will be given temporary custody of Christian Newman. He also reveals that he’ll allow supervised visits – that goes for both Adam Newman (Mark Grossman) and Nick Newman (Joshua Morrow). Adam’s glad his role at the biological father’s being recognized, but the judge warns that he isn’t endorsing Adam with his decision.

Adam grumbles with Sharon Newman (Sharon Case) afterward, so she worries he might be plotting something. Sharon warns that Adam needs to show he deserves a place in Christian’s life. He insists he’s not planning anything, but Sharon’s worried about Adam’s anger level. Adam lets Sharon know he’s handling it and will get in touch if he needs her.

Young and the Restless Spoilers: Abby Takes A Risk Partnering With Phyllis – Will It Pay Off?

Later, Adam tosses back a drink as he stews over the situation. He gazes at Christian’s pic and his hand shakes a bit. Back with Nick, he talks to Victoria and Chelsea Newman (Melissa Claire Egan) about Christian as well. Chelsea feels bad that she could’ve stopped this or at least bought Nick some extra time. Nick assures Chelsea that she was right not to fall for Adam’s test. Victoria agrees it would’ve been demeaning and might’ve created confusion for Connor Newman.

Once it’s time for Christian to head out, Nick explains that the boy will be staying with his aunt for a while. After Nick’s alone with Chelsea, he breaks down in tears and leans on her for support. Over at Devon Hamilton’s (Bryton James) penthouse, Abby Newman (Melissa Ordway) and Nate Hastings (Sean Dominic) are on hand to celebrate. They party over Elena Dawson (Brytni Sarpy) living with Devon as a couple.

Young and the Restless Spoilers: Jett Slade’s In The Hospital

Abby fills Devon in on the Grand Phoenix Hotel partnership, and he’s happy for her. After Ana Hamilton (Loren Lott) shows up and explains that Jett Slade’s (Gilbert Glenn Brown) in the hospital, Devon offers the jet so they can be with him and hear his test results. As for Nate and Abby, they end up back at his place. The two of them take their relationship to the next level by making love.

At Society, Sharon bumps into Billy and lets him know neither brother won the custody battle just yet. She suggests Victoria will have more details for him. Sharon listens as Billy shares his Adam troubles. He confesses to getting his hands on a gun and fantasizing about getting rid of Delia’s killer. Billy contends that he wouldn’t put his family in jeopardy like that, but he does feel deeply haunted.

After Billy mentions some of the weird dreams and hints, he suggests Delia’s trying to tell him something. Sharon feels like Billy needs help, but she’s willing to fill that role until Billy can find a good therapist. Elsewhere, Michael Baldwin (Christian LeBlanc) insists this is Kevin’s big chance. He wants Kevin to get out of town and vanish with the fam before Adam notices.

Michael thinks this is the ideal opportunity since Adam’s distracted with the custody chaos, but Kevin doesn’t want to leave his brother stuck in this mess. After Michael keeps pushing, Kevin caves in and decides to pack. He’s grateful that Michael’s always there for him, so they express their love for each other.

“The Young and the Restless” spoilers say some great scenes are coming up. We’ll give you updates as other Y&R news and rumors emerge. Stay tuned to see what’s ahead in Genoa City.