Young And The Restless Spoilers & Recap Wednesday, July 24: Jack And Ashley Have News – The Verdict Is In – Kyle Is Furious 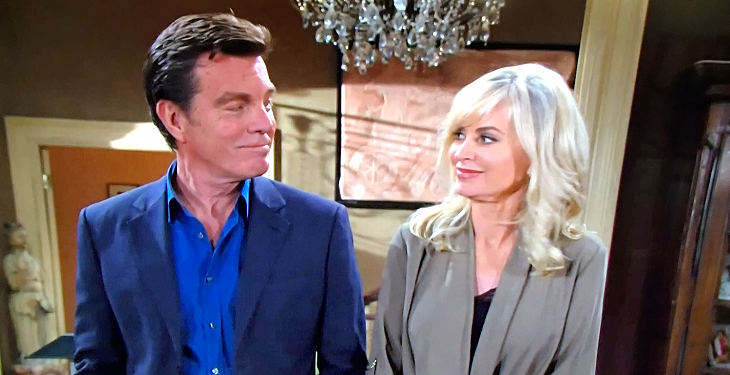 “The Young and the Restless” (YR) recap for Wednesday, July 24, 2019 reveals that over at the Abbott mansion, Billy Abbott (Jason Thompson) dreams he hears Delia Abbott’s (Sophie Pollono) laughter and finds writing scrawled behind a piece of torn wallpaper at the Chancellor mansion. He awakens and leaves.

Young And The Restless Spoilers – Theo Vanderway Spills Some Secrets

At Crimson Lights, Y&R’s Adam expresses confidence to his lawyer, who receives a message the judge has reached his decision. Nearby, Theo Vanderway (Tyler Johnson) hears Celeste Rosales (Eva LaRue) leaving Lola Rosales (Sasha Calle) a voicemail about dress shopping and introduces himself. He’s an old friend who tore up New York with Kyle Abbott (Michael Mealor). Theo chuckles about the stories he could tell and says Kyle ‘claims’ he’s done with all that. Celeste feels there’s a lot she doesn’t know and is stunned when Theo says Lola had surgery.

Young and the Restless Spoilers: Abby Takes A Risk Partnering With Phyllis – Will It Pay Off?

At Society, Kyle wants to make plans but Lola is too busy. He knows she’s off the rest of the day and asks if she’s avoiding him. Kyle urges her to be straight with him. Lola admits she’s unsettled about his past and needs some time to reconcile the New York Kyle with the one she’s engaged to. Kyle loves her and believes they can work through this.

Later, Celeste bursts in and confronts Lola about Kyle being married to Summer Newman (Hunter King) and her liver transplant as Kyle looks on in horror. Celeste hollers that Theo told her everything – she can’t understand why Lola would want to be married to Kyle. Lola and Kyle protest it was complicated. Lola suggests she and Celeste talk at the apartment.

At the Chancellor mansion, Y&R’s Kevin Fisher (Greg Rikaart) is puzzled at Billy’s arrival and asks if he had another dream. Billy unveils the word ‘Adam’ behind the torn wallpaper and says Delia Abbott’s trying to tell him something. Kevin feels it’s impossible. He peels away more wallpaper to reveal ‘Cordelia’. Kevin laughs – Madam Cordelia was her name during tea parties – Delia must have written it before she knew better.

At the court, Nick and Adam are arguing loudly when the judge appears. He lectures about their behavior – he’s denying both of them custody. They’ll revisit this after three months. The judge urges them to find a qualified relative to step in temporarily.

At Y&R’s Sharon Newman’s (Sharon Case) place, she and Rey Rosales (Jordi Vilasuso) agree it was best she cut ties with Adam, but once alone, Sharon reads about the custody battle. Later, Rey answers the door when Adam arrives to see Sharon. She appears and Adam explains this is about Christian…he needs a mother. He argues Christian knows her and loves her. Rey interjects that he’s manipulating her and goes upstairs. Adam tells Sharon she’s the only person he can ever count on. He coaxes until she agrees to help. Rey reappears and finds them gone.

Billy Abbott returns to the Abbott mansion where Jack and Ashley announce they’ve decided they work best together and will merge their companies. Traci is thrilled but Billy looks grim and isn’t a fan of working with Ashley again after she shredded Jabot. Ashley gets it, but working together is what their father would want. Billy’s unconvinced and leaves. Later, Ashley and Jack toast – it’s what dad would have wanted.

At Newman, Y&R’s Nick tells Victoria his world blew up and she may be the only person who can fix it. He explains needing someone to care for Christian temporarily.

At Lola Rosales’ apartment she warns her mother she won’t debate whether she and Kyle should be together – she’s in no position to judge. Celeste emphasizes how devastating betrayal can be. Lola explains that Kyle married Summer to save her life. Celeste is placated but is still upset no one told her Lola almost died – she feels like an outsider and won’t stay where she’s not welcome.

Y&R’s Kyle finds Theo at Crimson Lights and roughs him up. He knows he tried to cause trouble with Lola Rosales and informs Theo he’s dead to him. He adds if he hurts Summer, he’ll pay.

At Society, Billy writes ‘MADAME’ on a napkin. Traci appears and Billy asks how she lives without her daughter. Traci does it the same as he does; one day at a time. She’s sure the feelings he’s having about Delia are linked to Adam’s return. Billy assures her he’s fine and she goes. Billy’s phone rings and he ignores it.

At Newman, Y&R’s Victoria can’t reach Billy and will have to fill him in later. She leaves with Nick. And that’s a wrap.