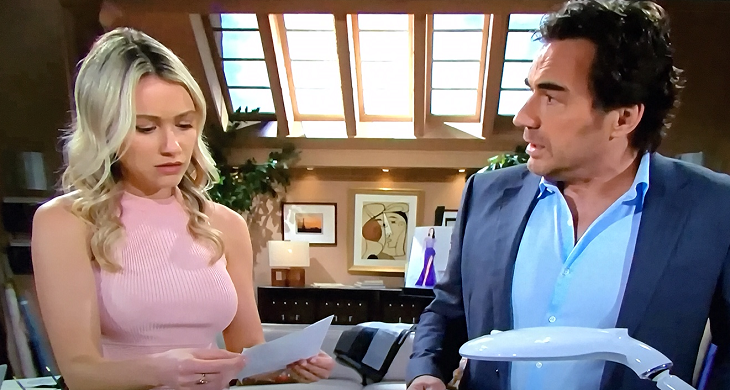 “The Bold and the Beautiful” (BB) spoilers for Thursday, July 25, 2019 reveals that over at the cliff house, Liam Spencer (Scott Clifton) examines the adoption papers and flashes to Flo Fulton (Katrina Bowden) telling Thomas Forrester (Matthew Atkinson) that Hope Forrester (Annika Noelle) never would have married him if she’d known the truth.

Steffy Forrester (Jacqueline MacInnes Wood) appears and asks why he has Phoebe’s adoption papers. He’s trying to find out how Flo came to be in L.A. and gave birth, and wonders about Flo’s relationship with Thomas. Steffy reveals she met Flo through Taylor Hayes (Hunter Tylo), but never knew the name of Taylor’s colleague.

Liam questions how she knew it was legit. Steffy says Taylor vouched for the person and even paid. Liam wants to know everything and is curious when Steffy explains the original documentation is locked away. Liam recalls Wyatt Spencer (Darin Brooks) saying Flo acted like she never gave birth, and phones the hospital in Vegas to verify Flo Fulton was a patient.

Bold And The Beautiful Spoiler – Thomas Forrester Books A Staycation

At the Logan mansion, B&B’s Thomas calls to Hope: “Good morning, Mrs. Forrester!” He kisses her and she wants to go downstairs to see Douglas, but Thomas says Brooke Forrester’s (Katherine Kelly Lang) down there and gets amorous. Hope looks uneasy.

Thomas relays that he’s booked them a ‘staycation’ for tonight…just the two of them. Hope tensely questions the purpose and thinks he should have made arrangements for Douglas and discussed it with her first. Thomas insists they’ll be together after she goes to work, and is irked when she says, “We’ll see.”

At Forrester Creations, B&B’s Flo flashes to Thomas threatening her as Ridge Forrester (Thorsten Kaye) knocks on the locked office door. She lets him in, and he chastises her for being late to Hope’s wedding and notes she doesn’t seem to be a fan of her marrying his son. They have a tense exchange about Thomas and Ridge hopes she’ll reconsider her opinion.

Bold And The Beautiful Spoilers – Flo Fulton Is Threatened Once Again

Once alone, Flo takes a call from Thomas and hangs up. He calls back and threatens she has more to lose than her boyfriend and her job…no one can know that Baby Beth is alive. Later, Hope arrives and Flo apologizes for missing her wedding. Hope explains yesterday was about a little boy’s happiness…that’s all. Flo questions her doing this to herself. Hope lost Beth but has a little boy that needs her.

Back at the Logan mansion, B&B’s Thomas disconnects from Flo and discovers Douglas was listening. He tells the boy he and Hope Logan Forrester are going on a honeymoon so he can hang out at Aunt Steffy Forrester Spencer’s. As Douglas is going to pack, he asks: “Why did you say that Baby Beth is alive?” Thomas denies it, but Douglas heard him on the phone.

Thomas grabs the boy’s arm and says he doesn’t want to hear those words again! Douglas insists his father said Phoebe is Beth and Beth is alive, then complains he never talks about mommy anymore. Thomas states: “Mommy is dead. Hope’s mommy now,” then threatens to go to New York with Hope and leave him behind if he doesn’t keep quiet. Once alone, Douglas repeats, “Baby Beth is alive. Baby Beth is alive…” And that’s a wrap.