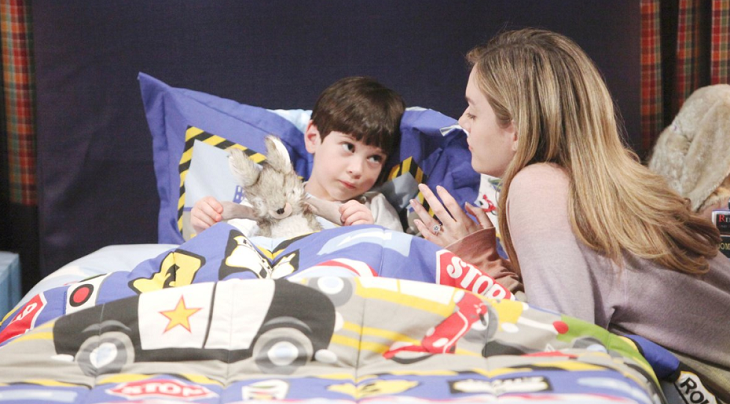 The Bold and the Beautiful spoilers indicate that Douglas Forrester (Henry Joseph Samiri) will find a new home after his father Thomas Forrester (Matthew Atksinson) is busted.

As the baby switch is revealed, so will Thomas’ misdeeds. Thomas’ obsession with Hope (Annika Noelle) has caused him to spiral out of control and do some horrendous things. Not only has he used Douglas as a pawn in his plan to get Hope, he’s also resorted to deadly behavior against anyone who interfered in his plans.

When Thomas learned that Beth was alive and that Emma Barber (Nia Sioux) was going to tell Hope the truth, he made sure Emma kept quiet. Thomas ran Emma off the road, causing her to die in a car crash. With Thomas facing murder charges and possible prison time, viewers wonder what will happen to Douglas.

Bold And The Beautiful Spoilers – Will Ridge Forrester Decide To Raise Him?

Many believe that Thomas’ father Ridge Forrester (Thorsten Kaye) and Brooke Logan (Katherine Kelly Lang) will raise the boy. However, there’s another person who will want to raise Douglas.

Hope has grown attached to Thomas’ son. Since the death of his mother Caroline Spencer (Linsey Godfrey), Douglas has formed a bond with Hope and considers her his new mommy. Hope loves the little boy and wants what’s best for him.

Since she married Thomas, she would now be Douglas’ next of kin and have custody of the boy. However, Hope’s plan of raising Douglas and giving him a good home isn’t going to sit well with some people.

Liam Spencer (Scott Clifton) isn’t going to be happy with Hope wanting to raise Douglas. With the couple about to be reunited with their daughter Beth, their focus should be on her. But Hope’s going to be concerned about Douglas and wants to make sure he’s well taken care of. With Hope dedicating more time to Douglas, this could be a damper on Liam’s plans to reunite with his ex.

The Bold and the Beautiful Spoilers: Will Hope and Liam Reunite Following Baby Reveal? https://t.co/MAL2BkAE3m pic.twitter.com/bDJnjK9w6b

Aside from Liam, Thomas’ sister Steffy Forrester (Jacqueline MacInnes Wood) won’t be too thrilled about Hope raising her nephew. Plus, there’s also Caroline’s uncle Bill Spencer (Don Diamont), who may get involved in the custody dispute over his great nephew.

Do you think Hope should raise Douglas?

The Bold And The Beautiful (B&B) Spoilers: Steffy Invites Paris In to Be Her…