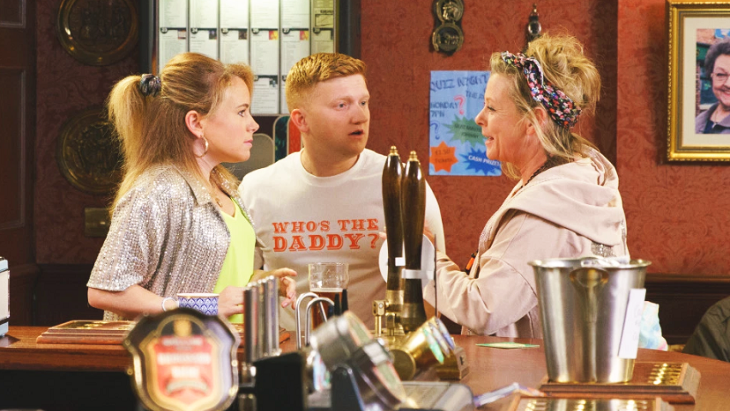 Coronation Street spoilers for Thursday, July 25 tease that Gemma Winter (Dolly Rose Campbell) will be left heartbroken when she hear of rumors that involve Chesney Brown (Sam Alton) and her own mother, Bernie Winter (Jane Hazlegrove).

Carla Connor (Alison King) will also get a huge shock while the residents of Weatherfield will soon find out the truth about an underground slavery network that has been taking place at a local nail salon.

It begins with Bernie barging in to Gemma and Chesney’s life unexpected. She tells them that she is broke and she doesn’t have a place to stay. Gemma decides to do the right thing by giving her the charity money that she and Chesney received for their four babies. This leaves Chesney absolutely furious.

Gemma will soon have a reason to be upset when she finds out that her mother has been making moves on Chesney, after he offered to give her a place to stay at his apartment. When Chesney sets up the couch for her to sleep on, Bernie makes a comment about how the two of them should sleep on it together.

Elsewhere, Seb Franklin (Harry Visinoni) will soon put the pieces together and realize there’s a slave network operating behind the scenes at the nail salon that his girlfriend has been working at. Seb is going to confront Jan Lozinski (Piotr Baumann), but he’s going to manage to talk his way out of it. Seb doesn’t buy it and continues to investigate the matter on his own.

Also, Robert Preston (Tristan Gemmill) will be doing everything he can to make sure that Michelle Connor (Kym Marsh) doesn’t find out that he’s also been romancing a very pregnant Vicky Jeffries (Kerri Quinn) on the side. However, it won’t be very long until both Tracy Barlow (Kate Ford) and Carla Connor catch him in the act and demand answers from him.

Meanwhile, Paula Martin (Stirling Gallacher) is hoping to make things up with Sophie Webster (Brooke Vincent), but she is still clearly hiding something while Jenny and Kate Connor (Sally Ann Matthews and Kate Brookes) are still at odds with one another.

That’s because they both want a little piece of Johnny Connor’s (Richard Hawley) bank account and will fight until the very end until they get what they think they deserve.

Now Chesney has met the whirlwind that is Gemma's mum Bernie, let's not forget his own mother Cilla and her 'unconventional' maternal approach back in 2004. 😂#ThrowbackThursday #Corrie @SamAston93 pic.twitter.com/zrklqAzcAP

Later on, Kevin Webster (Michael Le Veil) will tell Sophie that if she’s truly happy with Paula, then he will keep his distance from their relationship. Little does he know that Sophie now has other plans in mind.