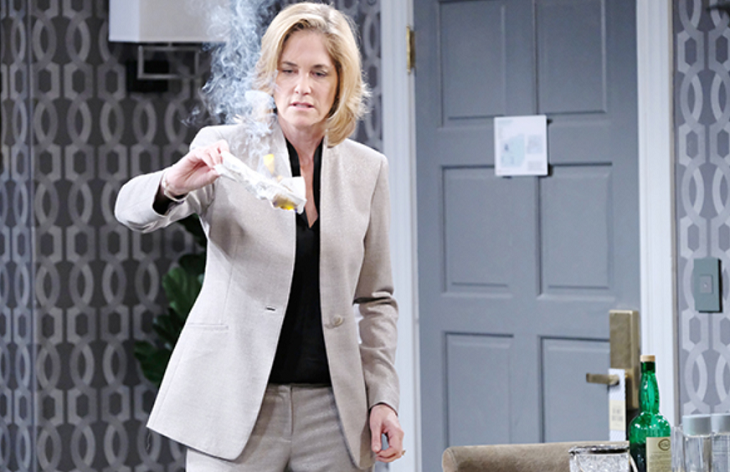 “Days of Our Lives” spoilers for Friday, July 26, tease that Jack Deveraux (Matthew Ashford) will demand the truth from his wife. Not only did Eve Deveraux (Kassie DePaiva) give Jack a dose of fake serum, she’s burning Dr. Wilhelm Rolf’s (William Utay) diary! Jack doesn’t know about the phony serum just yet, but he may have suspicions thanks to this little fire in their room.

Since Jack now knows Eve doesn’t really support his memory mission, conflict is about to erupt. “Days of Our Lives” spoilers state that Eve will defend her actions and try to explain herself to Jack.

She’ll want to smooth things over, but Jack will fly into a rage. In fact, Jack will insist he wants a divorce once Monday’s episode arrives.

In the meantime, Haley Chen (Thia Megia) will take a tranquilizer and do her best to relax. He won’t be easy due to her persistent visions of Claire Brady (Olivia Rose Keegan).

Haley just can’t get crazy Claire out of her head, but Tripp will do whatever he can to help. Once Haley takes the tranquilizer and finally dozes off, Tripp will hold her while she sleeps. DOOL fans know Tripp doesn’t think he has feelings for Haley. He assured Kayla Johnson (Mary Beth Evans) that they’re just friends and argued that their marriage was just an arrangement.

All that may be true, but that doesn’t mean Tripp’s feelings are under control. It looks like they’re simply buried at the moment, but they’ll rise to the surface thanks to this PTSD ordeal.

Other “Days of Our Lives” spoilers say “Nicole Walker” (Arianne Zucker) will finish filling Brady Black (Eric Martsolf) in on her plans. It won’t be long until “Nicole” gets in touch with a face from the past. Kristen DiMera (Stacy Haiduk) will count on Tony DiMera (Thaao Penghlis) to marry her so she can claim the CEO spot at DiMera Enterprises.

Gabi Hernandez (Camila Banus) will also want a rushed wedding to Stefan DiMera (Brandon Barash) for the same reason, so this fight for the throne is about to heat up! “Days” spoilers state that quite a battle’s brewing between “Nicole” and Gabi. It’ll be interesting to see how it all plays out.

Which CEO candidate are you rooting for in this ruthless war? We’ll give you updates as other “Days” news and rumors emerge. Stay tuned to DOOL and don’t forget to check Hollywood Hiccups often for the latest “Days of Our Lives” spoilers, rumors, updates and news.