Days Of Our Lives Spoilers: Jack And Eve’s Major Blowout 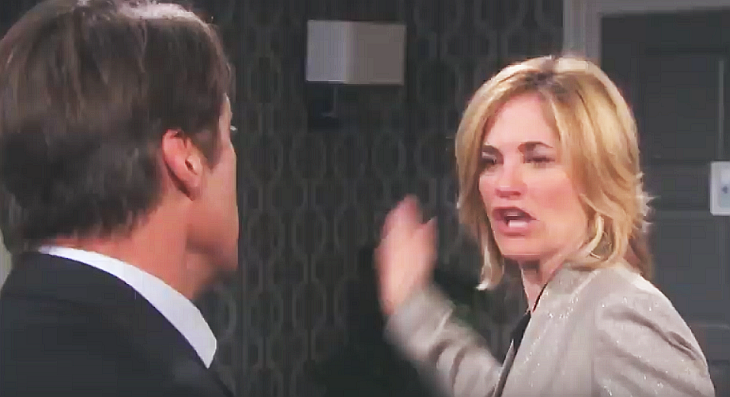 Days of Our Lives spoilers tease that Jack and Eve Deveraux (Matthew Ashford, Kassie DePaiva) will have a major blowout and Eve will attack Jack!

Days of Our Lives spoilers say that Jack will catch Eve in the act of betrayal, first supporting his decision to try to regain his memories by trying the memory serum. Eve lies and says she has procured it. She will inject him – with something – but it won’t be the memory serum.

It will be a fake, although apparently the substance at least will be harmless. It won’t hurt him but it won’t work to bring his memories back either. It will, however, devastate him emotionally and it may even turn the love he thought he had for Eve into hate.

Days Of Our Lives Spoilers – Eve Deveaux Has Been Manipulating Him

Jack will very soon realize that Eve has been lying to him and manipulating him, and when he does, his anger will seethe, feeling that Eve has played him for a fool. Basically, she has – using him as a blank slate who she thought she could mold into her own version of Jack Deveraux.

The old Jack’s instincts and personality are starting to come to the surface, along with his reactions and the way he would feel and act on. And he has vehemently expressed the desire to be his own man and make his own decisions for at least a couple of months now.

Jack has insisted to Eve that the reason he had decided to take the serum is because he wants to remember the parts of his life that revolved around his children and his relationship with them. He  continues to insist that it is not all about his ex-wife Jennifer Horton (Melissa Reeves) as Eve has accused him of, sarcastically calling her “Jennifer Rose”.

While “Jennifer Rose Horton” is her name, that’s not why Eve was calling her that! No matter how much Jack tried to make her feel secure that it is JJ Horton (Casey Moss) and Abigail Horton Deveraux (Kate Mansi) that he is most interested in wanting to rebuild his relationships with, Eve won’t believe him.

Jack will find out that Eve tricked him and gave him a placebo serum. He will also will likely find out that thanks to the help of Xander Kiriakis (Paul Telfer) she also obtained the real serum. Jack may catch her trying to hide it, like he caught her trying to erase evidence on Claire Brady’s (Olivia Rose Keegan) phone when she was trying to frame Ben Weston (Robert Scott Wilson).

Days Of Our Lives Spoilers: Rex And Xander Have It Out Over Sarah https://t.co/IuloS5vNSe pic.twitter.com/pJPuFpWTJx

He will undoubtedly confront her about this and she will try to lie her way out of what he “thought” he saw. This will lead to Jack telling her he wants a divorce. And as shown in the weekly Days of Our Lives preview video for the week of July 22, 2019, Eve will respond with attacking him and slapping him! Might she retaliate with more violence of a more dangerous sort, or will he manage to restrain her and perhaps even put her in handcuffs?